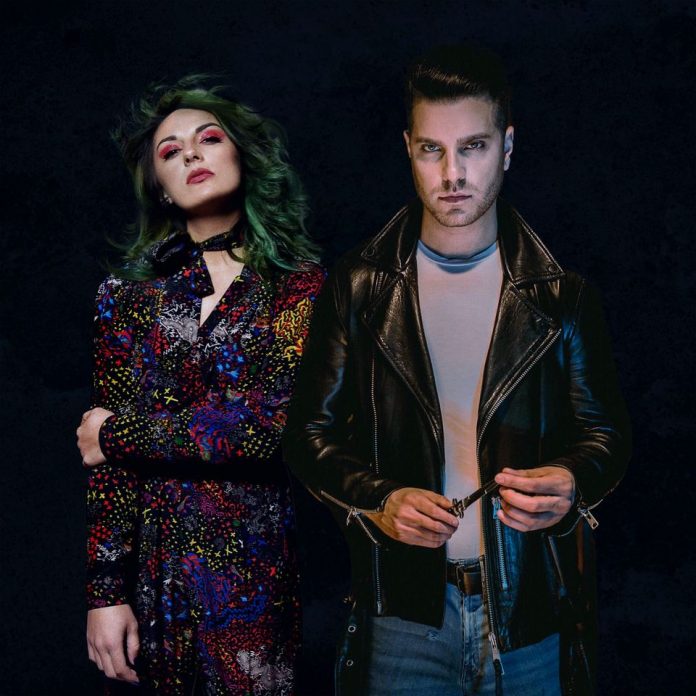 Detroit-based rock band Eva Under Fire just dropped their high-energy, anthemic new single “Blow” with a very special appearance from Spencer Charnas of Ice Nine Kills. The track, released via Better Noise Music, is unapologetically loud and uptempo, fueled by infectious, guitar-heavy production. A lyric video premiered alongside the track today, showing off the song’s sing-along lyrics that playfully paint the picture of the high-stakes anticipation and tension that can arise between two people. WATCH NOW. “Blow (featuring Spencer Charnas of Ice Nine Kills)” is now available for stream or download across streaming platforms HERE.

Of the single and collaboration, the band’s frontwoman and lead singer Eva says, “This is our first time having someone feature on our own material and it was so great getting to collab with Spencer! The riff grabs your ear and pulls you in close before the rest of the track kicks you in the teeth. The lyrics are aggressive, but fun so it was definitely a step outside my comfort zone as a writer.”

The song is set to appear on the official soundtrack for the highly-anticipated upcoming horror-thriller film THE RETALIATORS (a Better Noise Films production). It joins the company of an already epic line-up, including music from Mötley Crüe, Five Finger Death Punch, Papa Roach, Escape The Fate, Bad Wolves, Cory Marks, The HU, and more. Eva also appears in a pivotal scene in the film, making her onscreen acting debut in a feature-length project. An official music video for the song, featuring new footage from the film, will premiere soon.

Charnas, who also appears in The Retaliators, added that he is “excited to share ‘Blow’ with our Retaliators co-stars Eva Under Fire. Ever since we filmed the movie together, we knew a collaboration was in order. Inspired in part by The Retaliators, the song and video truly pack a high energy punch.”

“Blow” shows a new side of the band for fans as the world opens back up. Near the end of 2020, Eva Under Fire shared their single “Heroin(e),” a powerful, tragically beautiful rock song and call to action about the opioid crisis, which appeared on the soundtrack for the critically acclaimed indie drama Sno Babies. The full depth of the band’s sonic offerings will be heard on their upcoming debut album with Better Noise. They’ll also be teasing new music on stage this summer, as they join Buckcherry on select dates during their North American tour. For more details and tickets and full list of dates, visit: https://www.evaunderfire.com/

CONNECT WITH EVA UNDER FIRE