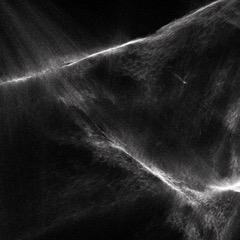 Final Light, a one-time only project featuring Perturbator and Cult of Luna’s Johannes Persson, release their self-titled album on June 24 via Red Creek.
The project is the result of both a recently discovered kinship and the opportunity for Perturbator, at the request of Roadburn’s Walter Hoeijmakers, to do a commissioned piece with a musician of his choice for the festival’s 2020 iteration, which of course did not happen.
“It was an honour,” James Kent (Perturbator) recalls. “I immediately thought of Cult of Luna. Even though my music is mostly electronic and synth-based, we both have a knack for creating atmospheres, so I thought it would be a very interesting match.”
Kent and Johannes first met only months beforehand, when Johannes attended one of the Frenchman’s shows in Stockholm. “I’ve been a fan for a long, long Bme,” Johannes says. “We had this creative discussion back and forth and we hit it off.”
As soon as the pair began work on their boundary-decimating songs, they knew that they had to be immortalized as an album. “It was immediate,” states Kent. “We had almost an hour of interesting music, so it would’ve been a shame to simply perform it and not do anything with it afterwards. It’s a project that I really want to share; it’s not only the fruit of a collaboration between me and one of my favourite musicians, but also very unique and once-in-a-lifetime”
The pair unveiled the live version of Final Light last week, as the performed on Friday at Roadburn 2022.
A preview of Final Light arrives today with the release of “In The Void,” a nine-minute song that incorporates the best of the two forward-thinking musicians. All-consuming, electrified bass notes are answered by creeping six-string melodies, before alien synth lines dance beneath anguished screams.
https://youtu.be/L7-O236KrJE

Final Light physical and digital pre-orders are available now with the album available on a variety of limited- edition, colour vinyl variants via Red Creek’s webstore (https://red-crk.com/collecBons/finallight), with digital pre-orders available here: https://orcd.co/finallight.
Final Light track list:
1. Nothing Will Bear Your Name 2. In The Void 3. It Came With The Water 4. Final Light 5. The Fall of a Giant 6. Ruin To Decay
Follow FINAL LIGHT here: https://orcd.co/follow_finallight