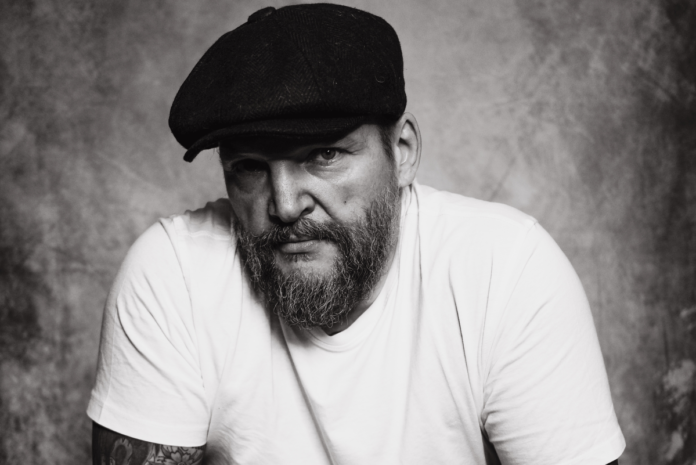 “I once travelled around Australia with a beautiful woman who set me on lots of the better paths I have taken in life,” he explains, “but she left the planet for her next journey a while back. I later had a dream that I was in an old car we had out there, driving in the middle of nowhere, listening to the only tape we had in the car, which was the album ‘Mule Variations’ by Tom Waits. I got excited when I looked round and saw her in the passenger seat, sun-bleached hair, tanned skin, bare feet on the dashboard. She then started glitching in and out of vision, like she was going to disappear completely. I woke up gutted, went to my studio with tears in my eyes and wrote this song.”

Describing its video, he states: “it wasn’t easy and seemed to give my director Jamie Neish and I the run around! However, when he came up with the idea of projectors and leaning a little into film noir style visuals, I knew we were onto something.”

With strong Americana influences and baring its soul on its sleeve, Rogers’ music is both authentic and timeless. ‘Gameblood’ was recorded at Sycamore Studios just outside Belfast and produced by close friend Gareth Dunlop. A thought-provoking and earthy masterwork, it is reminiscent of artists such as John Martyn, Keb Mo and the aforementioned Tom Waits, while Rogers himself describes it as “a visit to those hard places that most people put to the back of their psyche and build a wall around. This album is a true reflection of myself, my stories, where I’ve been and where I hope I am now. It’s music for the travelled soul, those folk who have seen a lot of life and can relate to the sentiments of the songs.”

As his 2006 debut album ‘Drawing Clocks’ started receiving attention worldwide and songs from it were placed in films and TV shows, the unassuming Rogers had already begun a successful separate career as an award winning tattoo artist. Fifteen years on, ‘Gameblood’ is worthy of similar recognition.

Rogers and Dunlop will perform a special one-off show together in London on 20th October at St. Pancras Old Church. Tickets are available HERE .

included on the album
GAMEBLOOD
out now