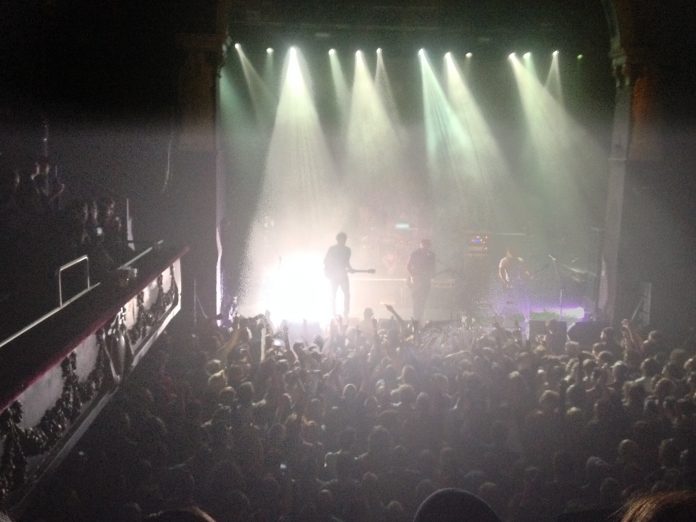 After an hiatus of five years, Charlie Simpson and his merry men are back, and they choose Birmingham as the first place they prove it.

Suffolk’s More Dangerous Animal – who contain the first Simpson we see tonight – formed from the ashes of Brigade, who at one point we rather liked. Claiming they did so out of a desire to get back to basics, MDA have certainly done that, as this is a very pleasing brand of loud, no bullshit rock n roll. The likes of “Manhole” have tinges of early Nirvana and their two vocalist approach brings to mind a more violent Honeycrack. Their last track features a huge bass groove and rattles along like a turbocharged Hot Water Music. Keep an eye on this bunch, chances are they’ve got teeth.

Canterbury’s Moose Blood are more alt rock and possess different aims. What “the kids” might call emo, the quartet have a similar gift for angular melody as Biffy Clyro. “Swim Down” builds on an undercurrent of despair pretty nicely. “Chin Up” chugs about as prime miserablism, reminiscent of a kinda rocked up take on those early Bright Eyes records that MVM used to enjoy around the turn of the century. Moose Blood’s tracks are four minute glimpses into a dark world where boy doesn’t get girl. Best of all is “I Hope You’re Missing Me,” but the the slow building “Evening Coffee” isn’t far short. And “I Hope You’re Miserable” needs no explanation we’ve all been there – and now that revenge porn is illegal you may as well pour your heart into music. Last song “Boston” sees them “sleeping alone, by the phone, waiting for you to call.” She ain’t gonna mate, forget her. But when you can’t, there’s always Moose Blood.

Even by rock standards going on indefinite hiatus after headlining a major stage at a major festival is majorly contrary. But that’s exactly what Fightstar did. The Bohemia tent at Sonisphere on the day headlined was quite a cool way to go though. And like the song says “We Apologise For Nothing.”

Tonight, nearly five years after that (and with only a few club appearances since) they are back, back, back, baby. And by the way, whisper this, but as “Paint Your Target” kicks us off, Charlie and his mates might still have the chops.

A few minutes later, in the middle of “Grand Unification, Part One” to be precise, there’s a moment when a gargantuan middle eight occurs, and it’s clear that to a great many people this a serious big deal and if you need further clarification then “War Machine” is slower and more deliberate, but the assembled throng is busy eating out of the four-piece’s hands by this point.

The set is the same as the one they aired on their comeback gig around Christmas, which means a lengthy run through some choice cuts on all their albums. And, boy, they sound big. “99” is huge, lush and loud, a wall of sound over a giant chorus, while “The English Way” is, with the passage of time, little more than classic rock.

The band seem intent on letting the music be the focus here, the stage lighting is such that you can rarely clearly see them. However when you listen you realise that Fightstar were – and perhaps now you have to say are – a very good band, songs like “Colours Bleed To Red” don’t happen any other way.

The aforementioned William Simpson returns to allow his brother to scream his way through the genuinely heavy “Deathcar” and with Charlie back behind the guitar the pounding “Chemical Blood” is angry at something. Here and there, some genuine moments of tenderness pierce the wall of sound, and “Sleep Well Tonight,” which Simpson tells us is one of the first songs they ever wrote, is a prime example, even allowing for the crashing crescendo.

The elaborate light show comes into its own for the last track “Palahniuk’s Laughter” which sees the venue bathed in red as they take it back to where it all began. If course they aren’t done, and after Charlie and Alex run through an acoustic “Amethyst” they polish off the rest of their debut “We Liked You Better When You Were Dead” EP, which means the raw “Speak Up” and “Hazy Eyes” before a gloriously understated “Mono” closes things.

This 90 minutes was a timely reminder as to the bands talents, and given the reaction when Simpson confides that they’ll be recording new material and back for another tour, all looks to be set fair. Tonight, though, was all about the first ten years, and as celebrations go, it was a very fine way to get nostalgic.