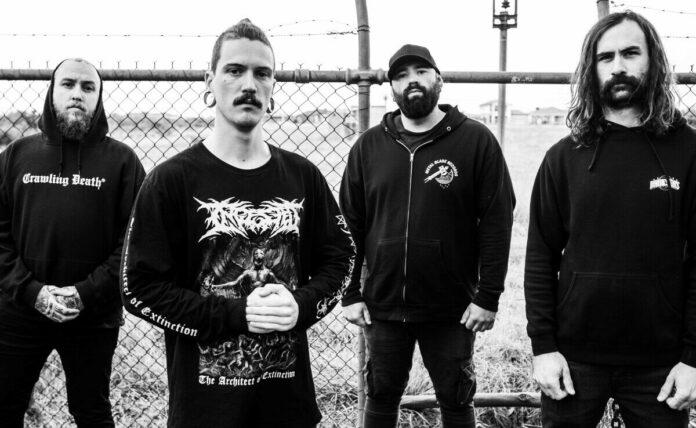 Ballarat, Australia’s Nicolas Cage Fighter are coming out swinging with a brand new LP on Blacklight Media / Metal Blade Records, The Bones That Grew From Pain. The title stems from the fact the record is “about varying degrees of pain, suffering and tribulation. Bones are an organic symbol of structure and supposed to install an image of strength and stability. So basically, the record tells narratives of when those two opposites are entwined,” the band adds. The Bones That Grew From Pain is slated for release on July 22, 2022 worldwide and can be pre-ordered now at: http://www.blacklightmediarecords.com/nicolascagefighter

The debut single “Shrine of Wire” is streaming now everywhere, including a brand new video, which can be streamed on YouTube at: https://www.youtube.com/watch?v=xTgDJQDNRYY

Formed in Ballarat, Victoria in 2011, the band have worked slowly and steadily to build their profile, dropping singles and EPs and sharing stages with the likes of Attila, Thy Art Is Murder, Thick As Blood and Deez Nuts, building a devoted fan base. With their guitarist Justin Ellis and bassist Tom Bardwell hailing from a hardcore background and drummer Matt Davenport having cut his teeth in death metal the blending of styles comes naturally to the band, with the dynamic, wide ranging vocal techniques of frontman Nicholas Moriarty holding the whole thing together. Though they wanted to remain true to the Nicolas Cage Fighter sound they also were not afraid to expand on this and take it in new directions. “The record feels darker than anything we’ve ever done before. We’ve also included more melodic, ambient and experimental parts than we’ve ever implemented on any previous release, and we feel that the record is a natural progression and evolution from the ’Cast You Out’ EP. It’s heavier, faster, the breakdowns will crush your head in, but there’s also some stuff we haven’t tried before and is at the cutting edge of modern heavy music.”