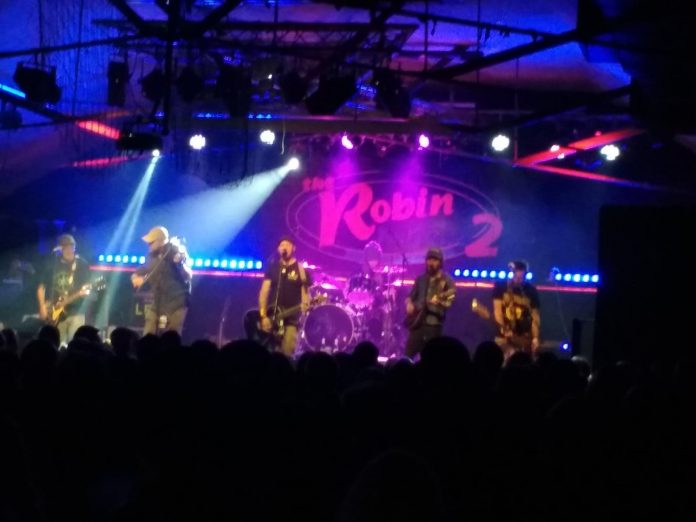 I managed to get to the gig just as Ferocious Dog took to the stage thanks to the joys of public transport.

FD are another wonderful, home grown punk / folk band infused with rock, reggae and Celtic vibes hailing from Warsop, Nottinghamshire. The easiest way to describe them is to say that that they would fit easily with the likes of The Levellers and New Model Army.

A friend raved about them a few years ago, having seen them on the bill at The Bearded Theory festival near Lichfield and I was lucky enough to catch their show supporting the Wildhearts in Birmingham last December.

The guys have a new album in the offing called “Fake News & Propaganda” and are out on a thirteen-date trek around the UK in support. As per my last brush with the band, it`s a furious hike through some unstoppable, not just foot stomping but jumping, dancing and singing along to catchy as hell tunes. Old favourites such as `Gallows Justice`, `Traitor`s Gate`, `Lyla` and `Cry Of The Celts` all get an airing.

Their version of the traditional song `Black Leg Miner` and fans favourite `Hell Hounds` are shared before a more poignant moment comes when singer Ken plays `The Glass` a song which commemorates Ken’s son Lee. Lee served in Afghanistan from the age of 18, and upon re-joining civilian life took his own life in 2012 at the age of just 24, unable to overcome the Post Traumatic Stress Disorder he was suffering from stemming from one of his friends being killed by a sniper.

My favourite `Too Late` is shared along with the moving `Unconditional` and a new song `Fake News` which references both the Tories and Rupert Murdoch. Violinist Danial Booth takes over the vocals for `Mairi`s Wedding Pt 3` as the night closes out. The fellas return for a three-song encore which includes the rousing `Slow Motion Suicide` dedicated to Jeremy Corbyn. What I really admire and respect about this band is the way they have built up a dedicated following through their catchy songs, music and sheer hard graft. The Robin was packed tonight, and I felt like I was the only one there not wearing a Ferocious Dog t shirt of some description. A new album due, this tour plus some European dates added and a few festival appearances pencilled in this summer, it`s looking like a busy time for these boys. Get to see them if you can.