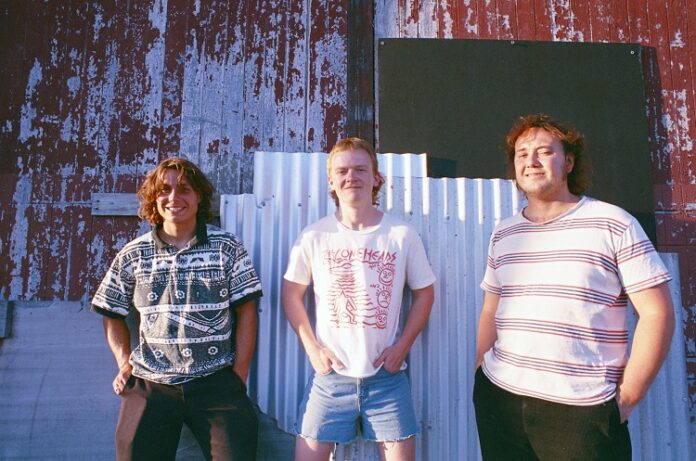 Watch the video here, or stream on all platforms at https://ingrv.es/StruckByLightning

Says The Chats’ iconic singer/bassist Eamon Sandwith, “‘Struck By Lightning’ came about when we were having a jam. I was on the drums, and I just started playing this little pattern, like, ‘struck-by – LIGHT-NIN’!’ I thought, ‘Hmm, that could work’, so I went home and wrote a song about getting struck by lightning, like how you would feel, and what would happen.

People can’t grow their hair back and shit,” he adds. “It’s weird – especially the whole no-eyebrows thing. That would be really scary! I’m really hoping that this doesn’t happen to me, now I’ve written a song about it.”

Eamon got a taste of the storm gods’ revenge when The Chats shot the promo clip for ‘Struck By Lightning’. He explains, “The premise was, we’re playing in this shed, some lightning hits us, and at one point I get blown off into the distance. Everyone’s like, ‘Aw shit, are you alright?’, and I just dust myself off and go, ‘Yeah, I’m good’. It’s a silly video, and I reckon I did like seven or eight takes of this stunt, where I was hoisted in the air at a fast speed, straight off my feet – like, whoosh!

“That night,” he continues, “we were doing a show, and I had this headache. I guess the stunt work had fucked with my head, and I started throwing up while I was playing. The thing is, the crowd loved it, and they went off about me throwing up even more than they did for any song we played.”

The Chats, though, were unperturbed by lockdowns and personnel changes. “It was actually great to have a bit of time, to be like, ‘All right, what’s our next move?'” says Eamon. “Otherwise, who knows, we could’ve just had a bloody Oasis moment and self-destructed!

“The new bloke, Josh – he fucking rips, man! He’s been a good friend of ours for years. His band The Unknowns were the first band that were our age on the Sunny Coast – before we’d even formed The Chats. In the early days, they were a full-on rockabilly band, and he had the quiff. He’d comb his hair back and stuff, and we just thought he was the fucking coolest guy ever.

“After our old guitarist Pricey left, me and Matt [Boggis, drummer] had a conversation, like, ‘If we can’t get Josh, we might just not carry on’. Luckily, he was willing to join, and we got right into it, writing songs and stuff. We were like, this is unreal – so good!”

The freshly-minted line-up broke in their new recruit via a bunch of shows in Oz between lockdowns, and duly cut ‘Struck By Lightning’.

Next month, exactly two years on from the original dates, The Chats jet back to the UK for the triumphant tour that should’ve followed the March ’20 release of ‘High Risk Behaviour’, these dates will inevitably whip up all the pogo-party euphoria necessary to kill off COVID-19 for once and for all. BELIEVE IT!