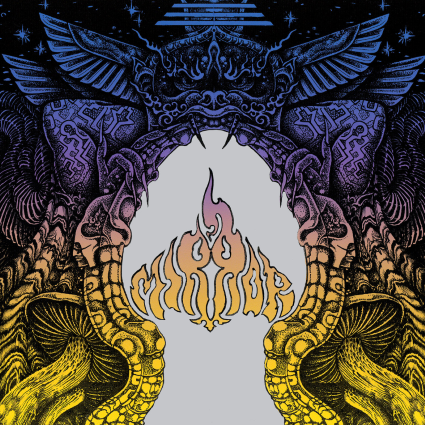 Out flew the web and floated wide/the mirror crack’d from side to side/a curse is come upon me, cried The Lady Of Shallot”
Alfred Lord Tennyson.

From unlikely origins, dark forces have been summoned, in the form of the debut album by brand new heavy metal outfit Mirror. A work of rare passion, drama and intrigue, this collection of cult crypt-kickers and mighty conjurings bears all the hallmarks of an instant classic.

Mirror is the musical brain-child of prime mover, bassist and die-hard metal connoisseur Tas Danazoglou (Satan’s Wrath, ex-Electric Wizard). A chance meeting with a  respected producer (Ghost, Cathedral, Paradise Lost) and accomplished drummer Jaime Gomez Arellano led to the pair hitting on a shared vision of a classically aligned outfit that drew inspiration from the epic amplified landscapes of lore and legend whilst avoiding the lure of mere tribute, rather reinventing the sound and fury they loved anew. They were soon joined on this quest by Satan’s Wrath axeman Stamos K, and their fate further sealed by the arrival of the mightily operatic tenor of vocalist Jimmy Mavromatis, before the ouroborus was completed with the arrival of Los Angeles-based guitarist Matt Olivo, whose infamy was earned as the guitarist of grindcore pioneers Repulsion.

Yet not only have these five farflung warriors managed to stay true to the spirit of their original mission, they’ve positively transcended it, delivering a thunderously resonant salvo of metal magnificence with as much savagery and sorcery to offer as pomp or circumstance. Grandiose in approach, richly melodic in delivery and fiercely passionate in character, ‘Mirror’ is a veritable feast for the lover of traditional hard rock and heavy metal. Think the glorious widescreen sweep of Rainbow’s ‘Rising’, the mystical atmosphere of Angel Witch’s self-titled debut and the cinematic sturm-und-drang of early Iron Maiden, yet also prepare to bear witness to a band taking the sparks that flew in the transition from the rock of the ’70s to the metal of the ’80s, and using them to forge a fire of their own creation.

What’s more, these infectious compositions bear the confidence of master craftsmen. Whilst denim-and-leather-clad pastiche abounds in contemporary metal circles, ‘Mirror’ stands proud and impervious to fashion, artifice or foolhardy overstatement – merely a true-as-steel testimony to power and ardor that transcends generations. From the Hammond-abetted bruiser ‘Heavy King’ to the stomping groove and harmony-driven thrust of ‘Madness And Magik’, and from the galloping madness of ‘Galleon’ to the colossal closer ‘Elysian’, these torrents of tumultuous riffing and monstrous bravura volley forth in gloriously devil-may-care style.

All or any expectations have been shattered all around, as Mirror have reached deep into the metallic motherload. And such are the portals opened up by their dark serenades. one suspects we’ll be in for rather more agreeable fate than any customary seven years bad luck.