FEATURED BAND: THE WEIGHT OF ATLAS 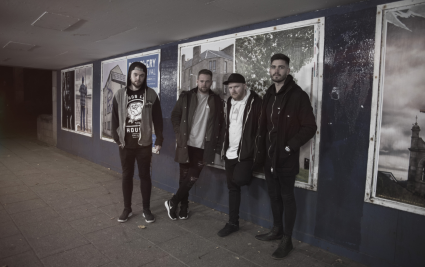 The Weight Of Atlas are a talented post-hardcore quartet who deliver monstrous riffs, contagious refrains, and ambient interludes that are framed with orchestral nuances.

The inventive riff slingers, offering a unique and diverse take on the metalcore label, tower over the pack, possessing an astute ability to adeptly fuse and combine genres. The band extract influence from a host of areas, from the ferocity of Devil Wears Prada and the shimmering atmospherics and potency of Deftones, through to the guile of Underoath.

In 2015, USA label We Are Triumphant snapped up the band and released their debut EP, Reflections. The release announced their arrival and garnered much critical praise, as well as shaping a hugely active fanbase that genuinely supports and interacts with the band. The Weight Of Atlas have worked tirelessly to support the EP on the road, where crowds are consistently blown away by their sheer intensity and raw power.

The Weight Of Atlas now unveil plans for their new video single The Art Of Letting Go, which is taken from their forthcoming debut album out later this year. The Art Of Letting Go is a powerful statement and charts the fivesome’s maturity and growth. With UK and EU touring penned for the latter part of the year, 2017 will be the band’s breakout year.