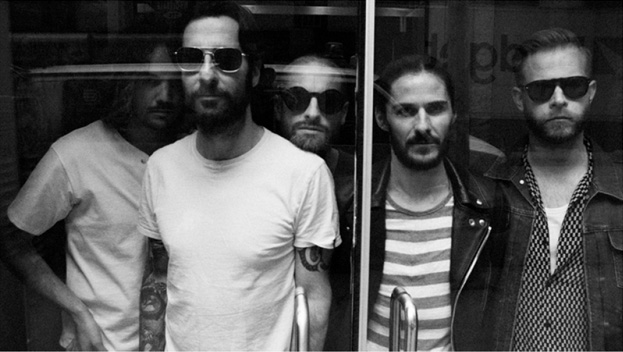 With their brilliant album just out, and MV looking forward to their gig tomorrow, here’s the lowdown

Some bands make music for the money, some for the acclaim and some purely for the sex, booze and drugs. But if it’s passion, commitment and dedication to the noble cause of rock’n’roll you believe in, then ladies and gentlemen, The Temperance Movement are here for you.

These are men who have forged a formidable reputation largely on the road. “We’ve really built this band from the ground up,” explains frontman Phil Campbell. “Our thinking has always been: we’re gonna make it work. One time we had two months in Europe solid with gigs, in a van on our own, doing our own road crewing. At Koko in London – which we’d sold out – we loaded in our gear ourselves, out of two Ford Focuses. And we have hardcore fans now – these kids had been standing there queuing outside the venue since 2pm – and we rock up and start humping our own gear. Some of them were taking pictures, but some of them helped us!” he smiles.

Still, if any band has learned to embrace the romance – the anti-romance – of the life of a touring rock band, it’s The Temperance Movement. Not only embrace it, but be elevated by it.

And that’s because the music matters more than anything else, so if that requires extra graft or added discomfort, then so be it. It’s an attitude that’s shot through their blistering second album, White Bear, a heavy, melodic set recorded in energetic bursts of studio time – in Monmouthshire, Bedfordshire and London – between touring commitments. And it’s an attitude that’s foundational to the band, one inspired by the core members’ experiences prior to coming together in 2011.

Founding guitarists Paul Sayer and Luke Potashnick were pals on the London session scene. They realised that trading guitar gigs for pop acts was far from fulfilling. They needed to team up, find a vocalist, and find an outlet for their true tastes and passions.

“Founding this band was a bit of a rebellion against how we’d all been making a living,” says Sayer. “Yeah, we’d been fortunate enough earning money as players, but you realised it wasn’t very musically rewarding. So our first Temperance Movement record was a real swing back against what I’d been doing for the past five years, playing for other people. Instead of having a big pedal board and trying to cover every sound off a record someone had made, it was basically about doing something simpler, more classic and trying to remember why I’d picked up the guitar in the first place.”

Remembering Campbell from the London circuit, the guitarists decided to send some song ideas to the vocalist at his home in Glasgow. The trio instantly clicked, and with the addition of bass player Nick Fyffe and drummer Damon Wilson, the five-strong line-up was fist-strong and solid.

“Even though I only played a little bit of guitar I understood where they were coming from,” avers Campbell, “what they were trying to get sonically.” He ticks off the key ingredients: “smaller amplifiers, Peter Green-era Fleetwood Mac, Eric Clapton, the late Sixties British blues explosion, The Black Crowes with their two guitars… And I sound a bit like Rod Stewart, and we loved The Faces and The Stones… That might not be what was happening in the music world in general, but we didn’t care. I’d met these guys and it already felt like the greatest band ever.”

That self-titled debut (2013) took the band around the world, starting with Sweden – the first continental European country to fall, and fall hard, for the band – and took them to the top of the rock’n’roll tree with four stadium shows supporting The Rolling Stones. It was a gig won in true fairy tale manner: the sister of a friend of Sayer’s, interning at a live agent’s, passed on some YouTube footage of The Temperance Movement. Mick Jagger, trawling through the young bands sent his way, picked the unknown youngsters.

Those summer 2014 stadium shows have helped rocket-power The Temperance Movement’s second album. White Bear is the more powerful, more expansive, more emotive follow-up to the Mojo-lauded word-of-mouth sensation that was their debut.

White Bear is blistering from the off. ‘Three Bulleits’, titled after the Bulleit brand of bourbon favoured by some of the band, is a swaggering start, and the explosive pace is maintained by the adrenalised ‘Modern Massacre’. That classic Faces/Crowes R&B punch is there in ‘Get Yourself Free’, which comes complete with a paint-stripping vocal from Campbell and Crosby, Stills & Nash-style harmonies from the high-stepping musicians.

Then there’s ‘Oh Lorraine’, which Potashnick – an acclaimed producer in his own right (he recently worked on Gabrielle Aplin’s critically acclaimed second album) – was determined would sound like a “cross between the Doobie Brothers and the Beastie Boys”. Improbably but also brilliantly, it’s job done.

Finally, rounding off the album is ‘I Hope I’m Not Losing My Mind’, a stoned-soul ballad that demonstrates the finesse that lies beneath the band’s signature power, it’s the records ‘At The Dark End of the Street’.

“For me a lot of the new album is kind of too… ostentatious,” says Sayer, unsure if that’s the most apposite adjective, “or maybe too powerful to play in the small clubs we started out in. I don’t want to say anthemic,” he adds, wincing at the overused word – even though, fair play, it’s 100 per cent appropriate. “But just sonically it wouldn’t work. In the first record there’s lots of detail, and you can hear the five elements of the band. The second record is more of a production and more of a combined sound.”

For Campbell and Sayer, this band and this album are all that matters. The guitarist was pleased to hear that sentiment echoed by one of his heroes.

“At one of the Stones shows I had a chat with Keith Richards. And right at the end he said: ‘Just keep this together.’ And he was serious. He was saying: ‘The hardest thing is keeping the band together.’ That had quite a profound effect on me. It’s hard being away – we’ve all got families – but you can’t moan about it obviously. But when you’re in this situation with five guys all the time, it can be tense and it’s hard to be creative. But you have to get your head down and get on with the next thing. And the next thing was making the record.”

The album title perfectly sums up this obsessive durability; White Bear is titled after a quote from Dostoevsky’s Winter Notes on Summer Impressions: ‘Try to pose for yourself this task: not to think of a polar bear, and you will see that the cursed thing will come to mind every minute.” And so is it with White Bear the album: Once broached, it’s simply too strong to ignore.