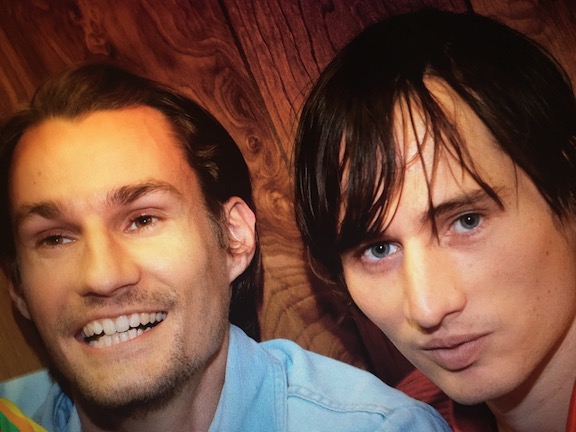 Swarming Branch is a band engaged in three seemingly disparate pursuits: elaborating folk music’s four-chord strum with complex extensions and substitutions, winking at the theater of glam rock from dive bar stages around the country without causing the cynics to spray beer out of their nostrils, and inviting the droning, unbridled tendencies of modal jazz to gradually displace rock and roll’s typical pentatonic shapes.
You could say they aspire to become the modern Midwestern Steely Dan, even if they’ve only demonstrated a portion of the elder group’s range thus far.
The band’s name is a reference to both the nature of its membership, which is intentionally and perpetually in flux, and its sound, which features densely worded slant rhyme over intertwining, capricious, often improvised melodies. And while the group is based in Columbus, OH, it’s likely that none of its contributors are inside the 614 area code at this moment. Songwriter Andrew Graham installs art exhibitions between spells of working with Swarming Branch. And if times are lean, he just might hang new drywall in your dining room.  Drummer Lon Leary, the only other permanent fixture of the group, splits time between waiting tables in North Carolina’s High Country and camping out in his late-’80s Toyota Van. Though pianist Dane Terry has graced every Swarming Branch recording thus far with his extraterrestrial keyboard stylings, he has seldom appeared live with the group since relocating to New York, where his 2015 musical theater production Bird In The House earned him the prestigious Ethyl Eichelberger Award.
On Surreal Number, Swarming Branch’s newest LP on SofaBurn Records, the group has temporarily suspended some of its formal experimentation to create a straightforward collection of ten songs. The album was conceived with the help of a Los Angeles team comprised of engineer Drew Fischer and producer Rob Barbato (Drinks, Kevin Morby, Peaking Lights, et al) and shows the Branch finding a thicker, synthesized, and more neatly arranged sound while keeping a playful yet assertive spirit that makes every song seem both unlikely and inevitable.
Swarming Branch’s Surreal Number will be available May 26th on limited vinyl, CD, digital and streaming formats via SofaBurn Records.
To pre-order the limited vinyl LP go to: http://ow.ly/BmXy30akWUd