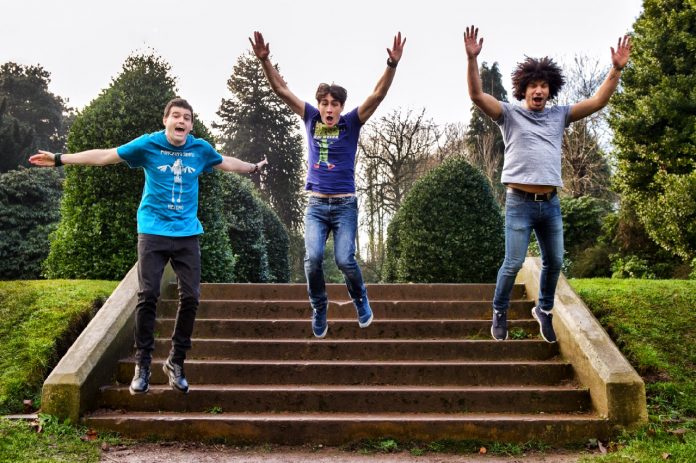 Grungey power pop from the banks of the mersey

Sheepy are Liverpool schoolfriends Luke Jones (guitar/vox) and Ollie Phillips (drums) aided and abetted by Irishman Villy Raze (bass). As hilarious as they are in person and in their new video for ’15 Songs’ taken from their second album ‘Alarm Bells’, musically they are on a dedicated mission!

To say songwriter Luke was prolific would be an understatement, as his abundant ability to pen short, sharp catchy punk pop in about the time it would take most people to flick through the newspaper on their daily commute is quite incredible. There are in fact plans to enter the World Guiness Book Of Records soon to celebrate the band’s hyper speed pop-writing and recording skills!

Of the song Luke explains it’s, “About writing my fifteenth bedroom-recorded solo album called “15” and I jokingly thought to myself why not write 15 songs in an hour for the 15th. I was thinking of going for quantity not quality with short punchy punk tracks of about 2 minutes each. But I was only half joking as I tried to brainstorm lots of ideas that were coming to me in a short space of time. I wrote the 15 songs in about a week.”

The video concept came, “about making the song-writing into some kind of sport. We embraced the 80s theme and created characters, Ollie as Rude Mullet (as he’s been told he looks like Ruud Gullit in the past), Luke as Skreetch (no idea why but I must have reminded somebody of the Saved by the Bell Character) and Villy as Ron Wanweirdly, who is already a member of the surreal band Wanweird.”

Originally discovered by London label Blang playing at a pirate radio festival in Mayo, Ireland. Songwriter Luke had by then already recorded ten solo albums at home. He gave four copies to the label who signed him immediately. Since then he has: made another six home demo albums, formed the band, played around the UK, Ireland and Europe, released one album, five singles and an EP, been played on 6Music by Steve Lamacq (who played ‘Another Day’ single seven times), Tom Robinson and Gideon Coe and on Absolute by Frank Skinner and Dave Gorman. He’s also had two singles used on Sky Sports Soccer AM to soundtrack goal compilations and recorded Sheepy’s second album proper which is soon to be released in April 2017 entitled ‘Alarm Bells’, where it was recorded in Brixton with Jon Clayton (Jim Bob, Monochrome Set, Band Of Holy Joy, Chris T-T).

Catch Sheepy at their forthcoming shows this April:

Luke is currently recording his 17th home solo album and the incredible new album from Sheepy ‘Alarm Bells’ gets released on April 9th on Blang Records.

Previous article
We Get Leg(Ends) An Know How To Use Them
Next article
REVIEW: MOTHERSHIP – HIGH STRANGENESS (2017)