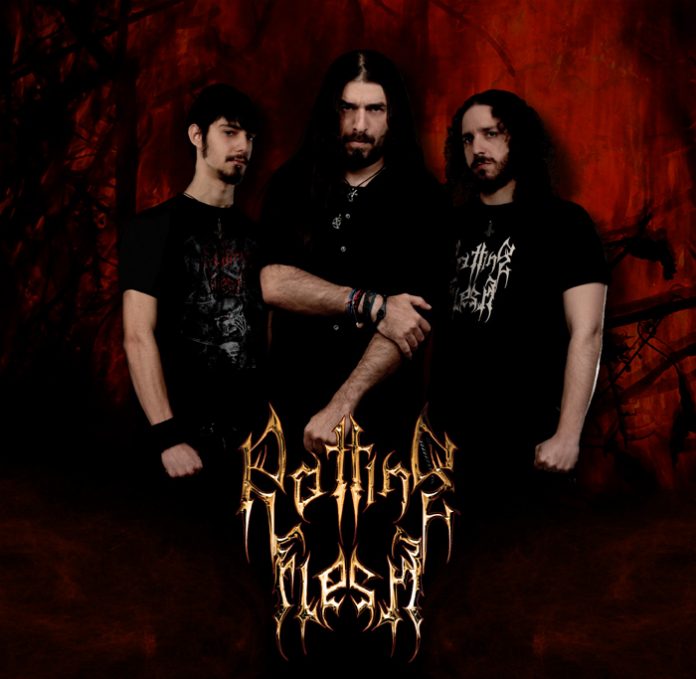 And we’ve got the new album in full

With a history of more than two decades in the underground metal scene and having tread difficult and challenging paths along the way, Rotting Flesh are back with a new album and a fresh lineup, raising their standards ever higher.

Since 1992, the year of their inception, the band has produced 6 demos and 2 official albums, thus establishing their own dark and distinctive sound. Their combination of death and black metal is exceptionally refined, integrating elements of the wider “extreme” metal genres.

The haunting melodies of the keys dexterously blend in with the harsh guitars and powerful vocals, forming an atmospheric, captivating and, most importantly, unique sound. Having done countless shows in Greece, as well as Bulgaria and Romania, either as headliners or supporting big names (Marduk, The Haunted, Entombed, Impaled Nazarene), the band is ready to explore new horizons and reach to a wider audience.

As of 2014, the band has recorded its third full-length album, “Infected Purity”, consisting of 12 brand new songs, due to be released this year. Infected Purity was recorded in 2013-2014 at Red House Studio, Thessaloniki, Hellas. Produced and mixed by Emmanouil Hermano and Rotting Flesh. All music and lyrics in this album written by Rotting Flesh. Artwork and layout by Jim Evgenidis (IconFilmWorx). Logo by Luciferium Graphics.