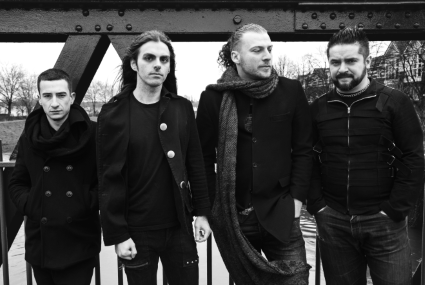 With a rich vein of progressive, modern and classic alt-rock stamped into their DNA, The Lotus cite Queen, Depeche Mode, Radiohead, System Of A Down and Pink Floyd all as major influences in fashioning their expansive sound.

Their music may be difficult to categorise, but it is easy to embrace and adore. The Lotusare sure to turn heads as they strike out with the release of their new video single ‘Mars-X’, which arrives on Friday 5th May.

Originally formed in 2004 in San Benedetto del Tronto, Italy, The Lotus built a steady fanbase throughout Rome and Milan. By 2008, the band had played their very first US tour which saw the youthful riff maestros take in cities throughout California and Texas. The inventive quartet then released their debut album Forgotten Silence in 2010 via Copro Records.  Much acclaim and praise followed, and so too did further touring throughout the whole of the UK. By June 2013, the quartet dropped a new EP, Tomorrow, along with their first video single Why Are We Still Living in the Yesterdays? – The band then went on to release another EP in 2015, Awakening, which is a hefty piece of a progressive and psychedelic ambient rock that will delve into your inner core.

The Lotusare currently working on their second full length album with Paul Reeve (Muse) at the helm, and this record promises to be their best work to date. The alternate crew also release a new video single this May, Mars-X. The single is a twisted voyage of modern synth prog which bathes in the turbulent waters of alt-rock. Part atmospheric, part groove, it is aggressive and ultimately mesmerising. With further singles and European shows to following during the coming months, The Lotus are here to take over your world.