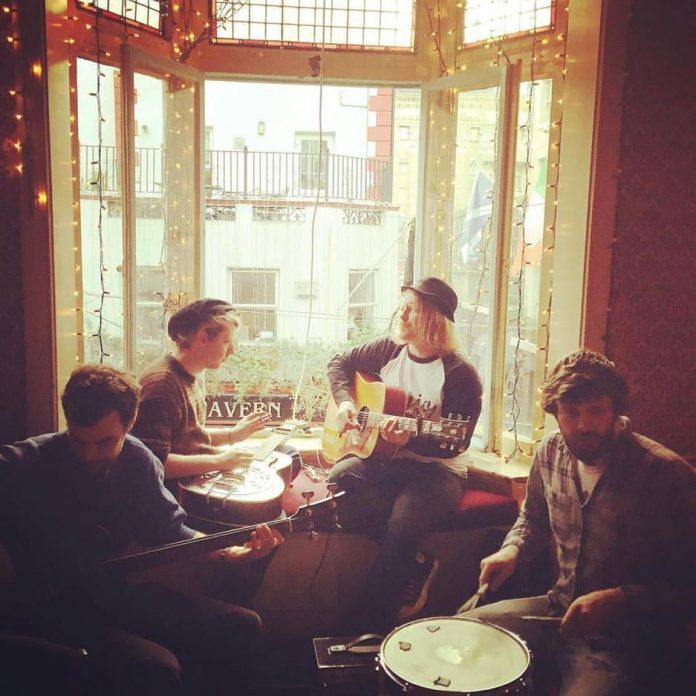 Little Mammoths are a London-based Rock’n’Roll Bar Band formed in 2014, that continue charging down the vein of The Hold Steady, Drive-by Truckers and Wilco.

Comprised of Matt Owens (ex-Noah & The Whale) and some of his oldest friends, Olly Cox on bass and James Besley on drums, now neatly rounded off by renowned pedal steel player Joe Harvey-Whyte, this band have the sort of chemistry most can only dream of.

Their debut album ‘Phantom Dreams’ was recently released on vinyl in the Spring of 2017, featuring a set of raucous songs about nightly lock-ins the band were privy to over three years of touring the West Coast of Ireland and The Scottish Highlands.  Their raw energy prompted Texan legend Ray Wylie Hubbard to declare: “If your ears dig gnawing on the gritty sounds from a young, dirty, cool rock band, I just found Little Mammoths who satisfy the craving…”

The quartet’s constant gigging and tireless work ethic often result in straight sets in excess of four hours, and has seen their road-hardened material performed to ecstatic crowds alongside Mumford & Sons, Fat White Family and Bahamas and at international festivals including Wilderness, Loopallu and The Clonakilty Guitar Festival.

Little Mammoths will release their eagerly anticipated second album ‘Cargo for The Road’ this summer, with pedal steel player Joe Harvey-Whyte now firmly in the fold and backed by a 3-piece horn section. The band are set promote the record through 2017 with extensive touring around Europe, and a full UK festival run, including Glastonbury.

Dates kick off with a pre-Glastonbury warm up at Michael Eavis’ favourite watering hole the Pilton Working Men’s Club on April 29th where Little Mammoths have been booked to play an astonishing 8 hour set which will take their entire repertoire of, not only, their own material from both albums, but also covers by everyone from Radiohead and Foo Fighters, to Townes Van Zant and Wilco. As a bonus, all the proceeds will be going towards raising money for WaterAid in this epic Glastonbury launch party.

Singer/guitarist Matt explains the long sets becoming the norm, “As we started to tour in a lot of far out places across Ireland and Scotland, you’d get paid, fed and put up if you could play for three hours, as you were the only band the venue needed to book that night. Initially it was born out of necessity, but we found it to be a great driving force to write more music and it’s when we started really improving as a band, learning all our favourite songs we couldn’t yet play. We’d be driving from gig to gig listening to music, a track would come on we all loved and we’d say to each other, “we should get this one on up for tonight,” so we did. We still do it now. We’ve now got a set list that’s well over 100 songs, and it’s always great to look down at the setlist and see if it’s not yours, the next song is instead one of your favourite songs of all time.”

He further recounts about these groundbreaking mammoth sets which have given them the reputation as being dubbed ‘The Hardest Working Band in Rock’n’Roll’ out on the West Coast of Ireland, “What’s great is you when see all the regulars come in the afternoon, unsuspecting at the start of the set, have to eventually leave cos they said they’d be home for dinner, and then you see them sneak back in later out that evening to watch you encore for a few more hours. Then there are those that just stay for the duration and you’re literally watching them have an eight hour session right in front of you. I just can’t wait ‘til we’ve got 8 hours of all ‘Mammoths originals, but we’re working on that….”

Be sure to catch Little Mammoths on tour and pick up a copy of the new record ‘Cargo For The Road’ upon its release at Glastonbury Festival on June 23rd.

The Captains, Glin Midday-1pm 21st May