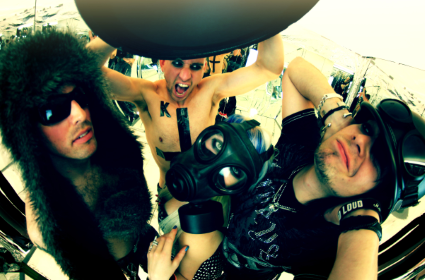 Essex hybrid with their new one
Raised on Manga, metal and the undeniable influence of the Essex dance scene, Killatrix like to push the boundaries of rock, lacing it with electronica to create a hybrid, electro-dirt noise. Citing influences from the deep grunt of Nu Metal, the vocal genius of Gwen Stefani and old school electro, their sound is a combination of hard hitting beats, massive bass, fat guitars and gnarly synths, topped with powerful vocals.
With the Essex music scene in good health but local venues in decline, the band decided to get out into the world, building up an impressive portfolio of shows which has seen them secure festival slots at the likes of Brownstock and V Festival, supporting reggae-metal outfit Sonic Boom Six as well as being asked to support one of the band’s biggest influences, The Qemists, on their 2015 tour.
In 2015 they released their first single ‘Overcome’ to some acclaim, dubbed as a ‘future classic’ by BBC Essex Introducing’s Ollie Winiberg, and have since released the follow-up single ‘Bad Language’, which has seen the band make a name for themselves in and around Essex and London. With new singles and a debut album ready to go, the band will be playing a number of supporting shows around the UK with a few European shows in the pipeline.
SinDii reveals “playing live is what we do best. Every time we step up onto any stage we give it all we’ve got, always”. Chris agrees, “We all love what we do and the music we make. There are so many ideas that we want try. It’s exciting!”.