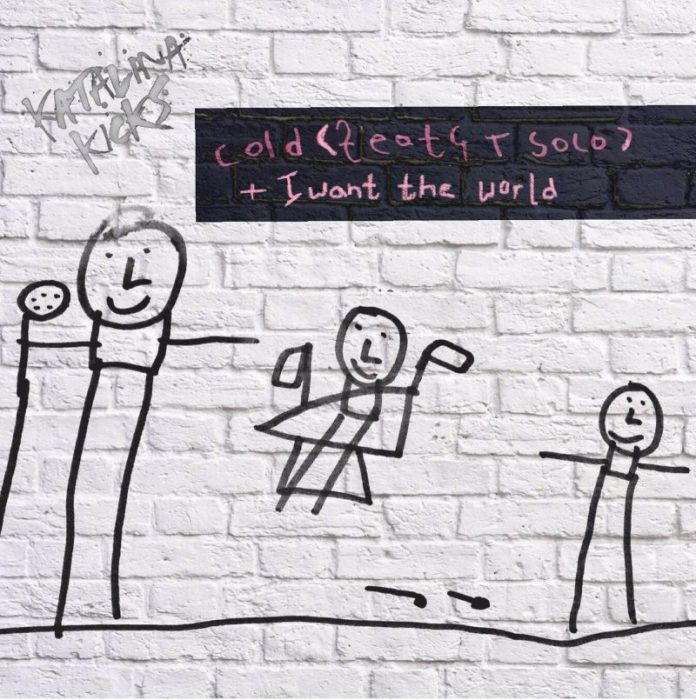 Katalina Kicks are a London band as only a London band can be, three nomads from different points of the compass – a Southern soul-searcher, a Northern agitator and a South American vixen – whose desire to make music lured them first to the metropolis, and eventually each other.
And, by birth, a quintessentially West London band, first fashioned in the clatter and fume of Shepherds Bush. Even if they’ve changed postcodes since, their sound – urgent, questioning, loud and fierce – has never lost the urban beat of W12.
Singer and guitarist Ian George is the last man standing from Katalina Kicks Mk I, once a punkish quartet who released an album named after their cat, stray moggy “Montague Rotter”, and found themselves accidentally sound-tracking a straight-to-DVD horror Z-Movie directed by the son of James Bond. “I’ve never watched it!” grimaces Ian of Jason Connery’s 51. “When we started we had an American publishing deal and that was one of the weird things that came of it. We got all of £3.50 for having a song in a crap film. So it’s taken a long time, and a lot of changing line-ups to get to where Katalina Kicks are today. I’ve always believed in the band. It’s just been a waiting game to find the right people.”
One such right person finally surfaced in the beard and flexing tattoos of Jase Wilkinson. Not so much born as smelted in Manchester, as a kid he’d wait for his stepdad to leave the house so he could sneak a listen of his Led Zeppelin vinyl. “And getting a whopping for it when he came home and found out.” Between John Bonham and hip hop he fell in love with the drums, later moving to London, instinctively settling westwards off Ladbroke Grove, first blurring his limbs behind the kit of a ska band until a chance audition with Katalina Kicks. Which he failed. “Because he wore these dodgy heavy metal black leather fingerless gloves,” laughs Ian. “My first thought was, no way am I having THOSE in the band. But then a few weeks later I called him back. Before Jase our drummers had mostly been arseholes, mentally ill, drug addicts and glory-grabbers. He was none of those. He had the passion and the power I’d always needed… so long as he kept those bloody gloves off!”
In the meantime bassists continued to fall by the wayside until a mysterious Brazilian answered their situation vacant ad. Nadia Silverstone left her home city of Curitiba for London the day after her eighteenth birthday. Her one goal: to join a London rock band.
Katalina Kicks were the only one to ever give her an audition. Their first surprise was Nadia’s look: a slinky, silver-bobbed creature with exotic Italian/Japanese features, less Girl From Ipanema than Girl From Outer Space. The second was Nadia’s style: a bass that was both forceful and fluid, twisting in the lull between Jase’s rhythmic thunder. That plane ticket wasn’t spent in vain. Katalina Kicks have been a formidable core trio ever since, occasionally swelling their ranks to four with an extra guitarist for added live ferocity.
Together they play simple and direct heavy garage rock’n’roll: power chords and pummelling rhythms, fuzzy guitar and throbbing bass, big riffs and shouted choruses, pin-balling between grunge, punk and heavy blues. In Ian they’ve also a songwriter who can’t help but use his band as a platform to air his anxieties about the world around him. “I would never pigeonhole us as a ‘political band’,” he explains. “I just write about things I see and hear that upset me. We’re not preaching at anyone or trying to change the world. We’re just saying these are the things that affect and worry us. They’re too important not to talk about, whether in conversation or in rock’n’roll. That’s all we try to do.”
Katalina Kicks are: Ian George (vocals/guitar), Nadia Silverstone (bass/backing vox),
Jase Wilkinson (drums/backing vox)
Socials:
www.katalinakicks.com
www.facebook.com/katalinakicks
www.instagram.com/katalinakicks
www.twitter.com/katalinakicks
www.soundcloud.com/katalinakicks
www.youtube.com/katalinakicks