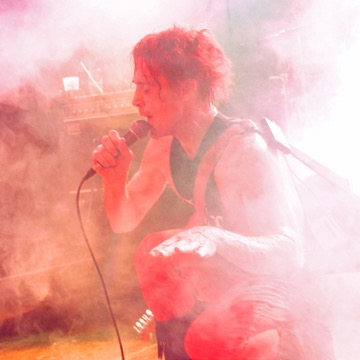 This June, prodigious rock musician Jupiter In Velvet will release a new album entitled ‘In2 the Arms of Love’.

The first single out of the box is called ‘Til the End of The World’ – a rather groovy little tune that could be visualized as Bowie and Hendrix doing a school project together for their abnormal psychology 301 class.

So who exactly is Jupiter In Velvet? He’s a rock musician and songwriter. “A rock musician you say, I thought they were a dying breed?” Not quite, in fact not even close.

You could say that Jupiter is a musical cross-dresser, a transgenre musician with extensive rock roots and a big sonic wardrobe to keep things interesting. And to feed your curiosity even more, he writes very compelling, thought-provoking lyrics, looking at personal and social issues through the lens of spirituality.

Jupiter In Velvet’s music is an unusual mix of different time periods and rock styles. One moment the song draws you in with a thread of familiarity and the next moment it surprises you with the unexpected.

Among the labels the music press and bloggers have given his music include; ‘Alt-Pop Psychedelic Rock’, ‘Electro Dance Rock’ and ‘Alt-Punk’ to name a few. But no matter how one tries to label Jupiter In Velvet, the label will never stick for his music is simply him and he is always evolving.

Jupiter In Velvet is a man with a rather unusual background. Originally from the US with an English, Irish and Scottish heritage, he has been a musician nearly all of his life, learning the drums at 9 and playing gigs with his first band at age 10.

In his teens he taught himself to play guitar, keyboard and singing, and began his songwriting development. His professional music career slowed down as he went off to college, getting a BA in marketing & psychology and an MBA in finance, before starting his PhD in finance.

During his first semester working on his PhD, Jupiter stumbled into a chance trip to South Africa where he had an epiphany; Life was too short to place money in front of happiness and to not go after one’s dreams.

Jupiter came back, finished the semester, quit school and moved to LA. He went on to play and tour for many years with a string of bands as lead guitarist and singer including: Big Mic & the Metallic Marauders, Zuzu’s Petals, Woolton Parrish and 2MorroW EvR AfteR.

Finally, after limited success, Jupiter moved to the UK in 2011 to remake himself and merge his vast musical influences and interests to create something new, compelling and uplifting.

And thus, Jupiter In Velvet was born, releasing his first album in 2012 ‘Screaming The Love Behind The Scars’ to much critical acclaim.

Last year. Jupiter In Velvet released a psychedelic-tinged effort called ‘The ONE In The Many’, that soared on many college charts while producing a wide variety of mesmerizing songs like ‘Peace This Thing Together’ and ‘Everyone’s Looking 4 Something They Can’t Find’, whose videos together pulled almost a million views on youtube.

With this year’s release of In2 the Arms of Love, Jupiter will be setting the airwaves alight again and loving every minute of it!