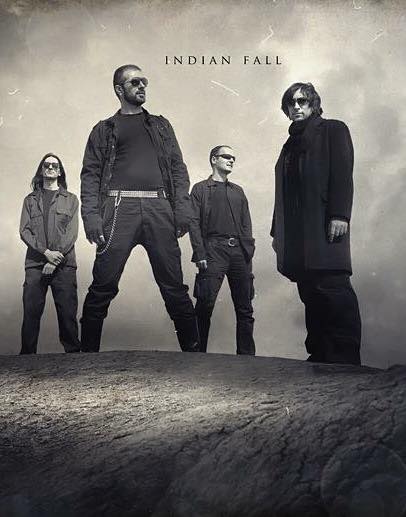 The Romanian metal legends have just announced plans. We sat down with them for a chat

The roots of Indian Fall are buried in the beautiful feeling that only music can engender. During 1996, we were kids obsessed by philosophy, Pink Floyd and the world was never big enough…I remember one night I got a tape from a friend with one side Moonspell – Irreligious and on the other side Tiamat – Wilhoney. I was really shocked and the whole week I was listening to these albums. They were incredible. Well, it was 1996. Slowly, I was searching and gathering lots of tapes, Crematory, Theatre of Tragedy, Opeth, Ras Alghethi, At the Gates and many more.

At that time, there was motivation into making music but the typical Romanian does not appreciate the metal genre. Together with Adrian Vitanescu we decided to create a band and Indian Fall was born. We attended few festivals and at our first show outside our native town, Adi Vitanescu won the “best guitar player”. It was cool that nobody knew who were we but…the adventure had begun. Soon we had a vocalist used with death metal and grindcore: Andrei Calmuc from Tenebre and Putrefaction, now playing in Code Red. In 1998 we recorded our first demo called “Shadows”. It was a home based studio recording and we did our best. It was really hard, we were all students and we spent nights trying to get a decent sound. During recording sessions we had a lot of fun. The vocals were recorded during night time and sometimes using a blanket in order to reduce the volume…the neighbors were not so happy hearing gothic black metal vocals.

In 2001 we attended the most famous festival in Romania, Top T Buzau. The big prize was a contract with Promusic Production, a metal label from the fewest in Romania. Well, we won again and the end of the year we released our first album, Pathfinder. There was a cool line-up: Andrei Calmuc – vocals, Adrian Vitanescu – guitar, Mircea Fulea – keyboard, Gabi Barani – drums and the one writing here, Adrian Nagy – bass. We had an excellent feedback from Romania and also from Germany, Canada and Japan. The year 2002 brought an EP released on mini-cd called “Counting the Emptiness”. In 2007 we started working for the new album and we are the same guys except Gabi, the drummer who left Europe for some time to play classical music at philharmonics. We have a new drummer, George Bratosin from Leprosy Abscess. In 2009 we recorded Seasons in Equilibrium mastered by Dan Swano.

In 2010 there some changes in the band, we got a new vocalist Djeeckx and we recorded again an EP called Fear 4 Stages. Since then we started our new journey playing in many clubs, touring with Code Red and Deliver the God in Unholy Trinity Tour in Romania.

The year 2015 will bring for Indian Fall a new national tour, we have a totally fresh line-up with an excellent drummer, Septimiu Hirsan (Disavowed, Code Red), Radu Barna(The Thirteenth Sun), Costas Ciprian, Mircea Fulea, Djeeckx and Adrian Nagy. In 2016 we will release our new album and you can join us at Rockstadt Extreme Fest 2016.