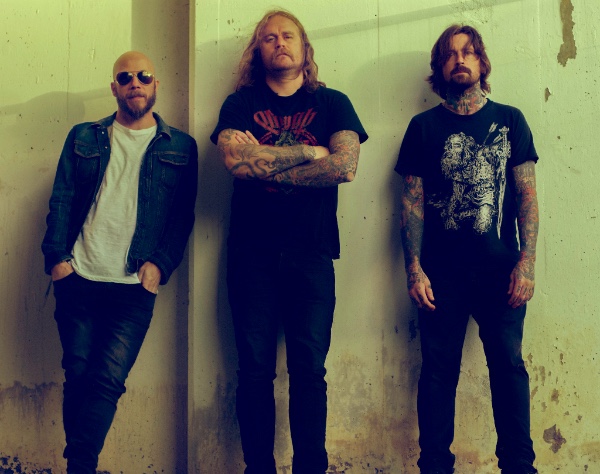 There’s no escaping the fact that Sweden is an incomparable breeding ground for some of the heaviest and most crushing metal bands in the world right now.

Amon Amarth, Grand Magus, Candlemass, Vokonis, Monolord… all have crossed the water and duly conquered in recent years. In fact, even those yet to arrive can more often than not be found waiting in the wings, battle horn in hand heralding trepidation, Scandinavian-promise and riffs the size of long ships.

One such band waiting to scorch the earth upon which they land is Gothenburg trio FIREBREATHER who will release their self-titled debut album on Suicide Records this October. Relatively new to the fold having formed in the spring of 2016 from the ashes of underground doom heavyweights Galvano, FIREBREATHER is a devastatingly weighty statement of intent. Taking in four tracks that swallow time behind tooth shattering riffs from guitarist/vocalist Mattias Nööjd and crunching rhythms via bassist Kyle Pitcher and Tommy Hanning (newly replaced by drummer Fredrik Käll), FIREBREATHER are a jaw-breaking triptych of sludge and doom rock.

Mastered by Brad Boatright (Sleep, Corrosion of Conformity, Beastmilk, Obituary) at his Audioseige Studio in Portland, OR and featuring artwork by legendary underground artist Adam Burke, FIREBREATHER are out to make 2017 their own. With a European tour announcement on the horizon, in the meantime head on over to Decibel Magazine now for an exclusive look at their brand-new video for ‘The Ice Lord’ – https://www.decibelmagazine.com/2017/08/01/video-premiere-firebreather-ice-lord/

FIREBREATHER is released on 13th October 2017 on Suicide Records.