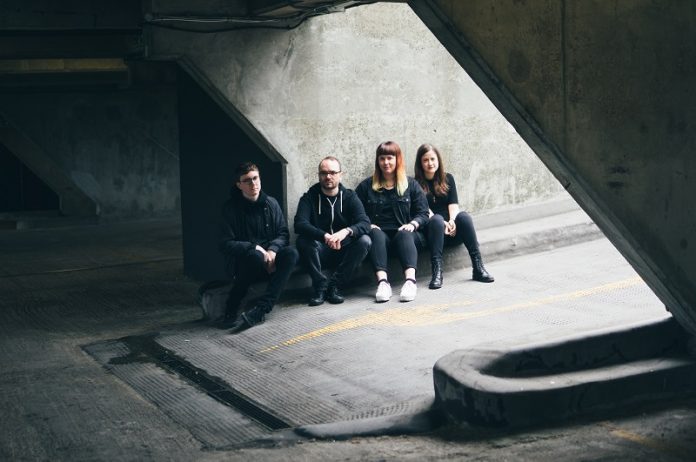 December 4, 2016
Reading time: 2 min.
Facebook
Twitter
Pinterest
WhatsApp
Linkedin
Email
Print
Telegram
Copy URL
By Andy Thorley
The London noise rockers you can’t afford to miss
Introducing Ex People, a four piece from East London. Laura, Calum, Vicki and Ed have been honing their chops in various bands and immersing themselves in the London DIY scene for a few years, before succumbing to the lure of the mighty riff.
Now reborn as Ex People and attracted to all things dark and doom-laden, they’ve forged a sound that both pummels and pulls you in. So what of that sound? Well if you want the simple description, then it’s fuzzed up, fucked up stoner rock, with grinding riffs, mean bottom end, and added punk attitude.
The band describe themselves thus… “Our music is a slippery concoction of anguish and catharsis — or, in other words, low-slung hulking riffs, lurching drums and soaring vocals.”
And who are we to argue? One listen to the two tracks that make up their new single, ‘Without’ and ‘Surekill’, nails that without question.
But we would go further. The fizzing, fuzzy guitar, low end bass growl and thumping wallop will hook the stoners for sure. However, added to that is a cornucopia of other influences that set Ex People apart from the legion of fuzz zombies.
There’s a healthy dose of grunge, a slab of sludge and doom. Squalling noise rock. A bit of kraut. The drums swing, Jaki Liebzeit (of Can) fashion and Laura’s pissed off banshee vocals will both scare you, and hook you in.
Taking their cue from bands like Windhand, Melvins, Electric Wizard and Kylesa, and mashing it with their own existential vibe, these songs will burrow their way into your brain, by way of carefully and fiendishly constructed hooks. So immerse yourself in the murky sonic world of Ex People; you won’t be sorry.
‘Without’ and ‘Surekill’ are available on Bandcamp now – http://expeople.bandcamp.com/album/without
Ex People are: Laura Kirsop, vocals. Calum Gunn, guitar, Vicki Dawson, drums and Ed White, bass.
Previous article
Death Metal Force In Euro Invasion
Next article
REVIEW: LUCID FLY – BUILDING CASTLES IN AIR (2016)