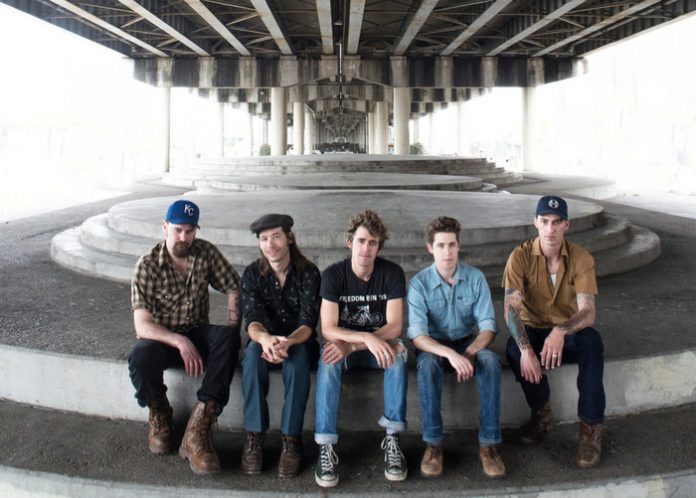 The Deslondes are set to return with their second album ​Hurry Home ​on 23rd June via New West Records.
The 13-song set continues their studied and inventive take on New Orleans country and R&B but also represents a sonic shift with a more electrified sound. Long combining elements of early Stax, Sun, and Atlantic Records with the influence of a more raw, stripped-down sound gleaned off field recordings from Alan Lomax and the Mississippi Records catalog, the band have now incorporated psychedelic flourishes that bring to mind the sonic experimentation of Joe Meek, Lee Hazlewood and The Velvet Underground. Lauded as “burgeoning stars” by ​The New York Times​, ​Hurry ​Home is the follow-up to the band’s critically acclaimed 2014 eponymous debut that ​NPR Musiccalled “energized, elegant and new,”Pitchfork awarded a 7.9 rated review stating that it “introduces a band that sounds confident and fully formed,” and Uncutgave it an 8/10 and called it “a rich, nuanced, fantastically enjoyable album that understands great music is often the product of a historical continuum rather than radical innovation.” For ​Hurry Home,​ the band split songwriting and lead vocal duties among its five members, Sam Doores, Riley Downing, Dan Cutler,John James Tourville, and Cameron Snyder, continuing their democratic ethos and musical versatility. ​
Rolling Stone premiered the video for the album opener ​”Muddy Water“, stating; “Written and sung by Riley Downing, ‘Muddy Water’ doesn’t actually fit the band’s newly rock-leaning form… it’s a languid, simmering acoustic ballad colored by nostalgia and the stifling humidity of a Louisiana summer,” continuing, “The video, shot along the Mississippi River, has a surreal ​Stand By Me vibe, centering around a group of young boys who play dead ringers for the members of the Deslondes.”
Hurry Home will be available digitally, on compact disc, as well as LP and can be pre-ordered now ​here​.
Named after the street in the Holy Cross neighborhood of New Orleans where the band first came together, The Deslondes have continued to tour relentlessly since Doores and Cutler departed their roles in Hurray For The Riff Raff to focus entirely on the band. The Deslondes met up last winter at New West Records’ studio and rehearsal space in Athens, GA., and recorded everything for five days, working out new songs and arrangements. With a batch of 20 new songs, they invited their longtime producer & engineer Andrija Tokic (Alabama Shakes, Benjamin Booker) to New Orleans to begin tracking that summer, creating a makeshift recording studio at The Tigermen Den in the Bywater neighborhood. The album that emerged was ​Hurry Home​. “It’s a fitting title for this album because our lives and our songwriting revolve around leaving and returning, or searching for, home,” says the band. “And home can be a physical place, a relationship, or a state of mind.”
Recordings from the early sessions, including “Just In Love,” “Muddy Water,” and “Better Be Lonely,” bear the mark of a hot New Orleans summer: a lack-of air conditioning, and creaky wood floors, which yield a languid, dreamy sound. Elsewhere on the New Orleans sessions is the feel of the city’s classic R&B, music made for dancing like “Sad Song” and “Hurricane Shakedown.” Over several sessions back at Tokic’s Nashville studio during the Fall of 2016, The Deslondes finalized the album, pushing their sound forward with new tracks like “Nelly” and the gospel-influenced title track. Downing’s songs bookend the album: the wistful opener, “Muddy Water,” recalling the “small town kids” of his Missouri childhood; and the closing ballad, “Déjà Vu And A Blue Moon,” which he says is “an ode to those who’ve spent a lot of time on the road, and maybe they always will.” A must-see live act, The Deslondes have toured the country extensively and have supported the Alabama Shakes, Hurray For The Riff Raff, The Lumineers, John Fullbright, Michael Kiwanuka and more.
www.TheDeslondes.com
www.NewWestRecords.com