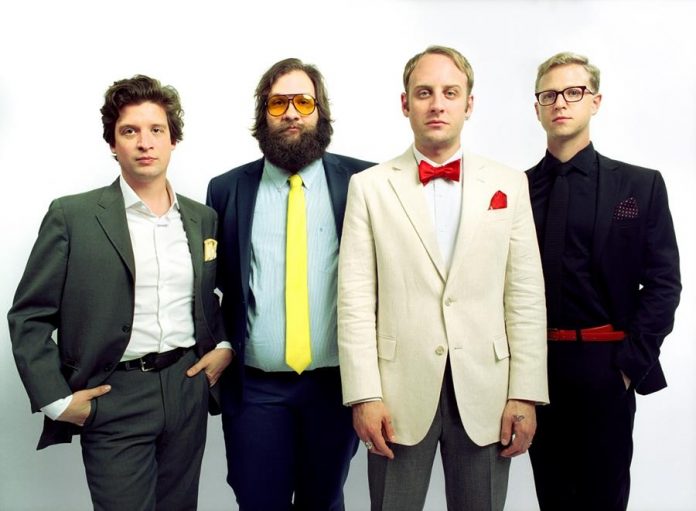 For the first time in four years the acclaimed and beloved band Deer Tick announce the September 15 release of a long-awaited new album…actually, two.

Never a group to stand by conventional protocol, the celebrated Providence, RI quartet will release two separate albums of original material, Deer Tick Vol. 1 and Deer Tick Vol. 2 (Partisan Records), recorded at Ardent Studios in Memphis, TN. The two albums complement each other yet reflect completely contrasting styles, both of which accurately represent the two distinctive musical personalities of Deer Tick — quiet and thoughtful / loud and raucous. Listen to the beautiful “Sea Of Clouds” from Vol. 1 and the garage punk-infused “It’s a Whale” from Vol. 2.

Deer Tick Vol. 1 showcases the folk-driven, roots/rock style with right amount of grit, that Deer Tick is known for. Lead singer/songwriter John McCauley is a masterful introspective and observational songwriter, who documents inner struggles and external conflicts with a perfect balance of heartfelt sincerity and wry wit. The opening track “Sea of Clouds” encompasses all of what brought so many fans to Deer Tick in the first place, and also what kept them there. Guitarist Ian O’Neil’s “Hope is Big” and drummer Dennis Ryan’s “Me & My Man” expand on the group’s already dynamic range.

On Deer Tick Vol. 2, the band turns it up and lets it fly with an injection of punk-inspired garage rock at it’s finest. Clever lyrics, infectious hooks and captivating melodies pack Vol. 2 with bassist Christopher Ryan skillfully laying it down with authority and attitude. The propulsion of opener “Don’t Hurt”, edgy pop of “Jumpstarting” and rowdy punk of “It’s a Whale” reveal that there was an obvious Jekyll & Hyde approach to recording Vol. 1 & Vol. 2. Vol. 2 closes with boisterous “Mr. Nothing Gets Worse”, with all three singers taking a verse on a song that would have made The Replacements proud.

Deer Tick defines the term outlier. Their ever-evolving style has never been claimed by any one scene or genre. They encompass key elements of indie-rock, country, punk, pop, Americana, folk and so much more, which is what makes it difficult to nail them down. With Deer Tick Vol. 1 and Deer Tick Vol. 2, the question really is, why would anyone want to?