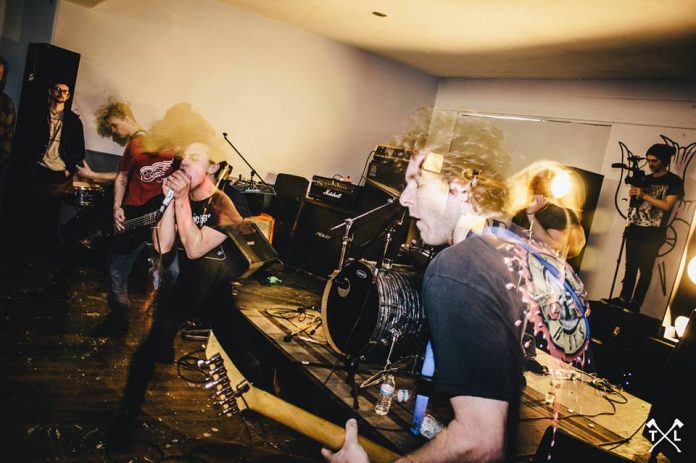 Extreme metallers from Michigan
Dead Hour Noise is a metal/punk/grind band from Lansing, Michigan formed in fall of 2013 by Collin Spencer (vocals), Ed Emmerich (guitar), Nick Deason (drums), and Seth Clickner (bass).
After a handful of appearances at DIY spaces and local venues in early 2014 the band recorded their first release, Tension, live at GTG House. Shortly afterward, guitarist Cody Hobbins joined to add depth to the sound and complete the lineup.
Their chaotic brand of extreme metal, influenced by late 90’s/early 00’s mathcore, is complimented by an equally violent and energetic live show that has earned them a reputation as one of the more abrasive local acts in Michigan. In 2014 and 2015 they provided local support for touring artists such as Norma Jean, The Flatliners, Of Feather and Bone, Vattnet Viskar, and Noisem, as well as appearances at Ogrefest in Lansing, Don’t Call it a Fest II in Detroit, and Take Hold Fest in Grand Rapids.
In August of 2015 the band finished recording their 2nd EP ‘Bad Things Are Going To Happen To Good People’, which was released on March 26th, 2016 on the Lansing based indie label Silver Maple Kill Records.
Bandcamp – https://deadhournoise.bandcamp.com
Facebook – https://www.facebook.com/deadhournoise