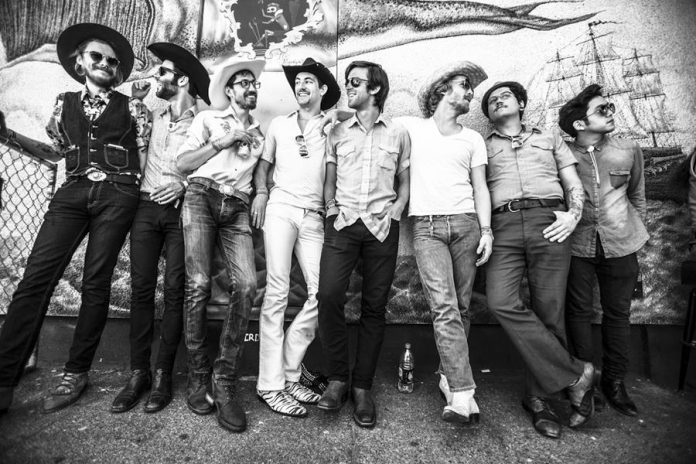 Yes, that really is their name

Merging Backwoods-style blues with honky-tonk, boot-stomping rhythms, the 8-piece powerhouse known as Country Lips deliver a sound more associated with the wild, raucous West than the grit and grunge of America’s Emerald city. The spirit of unadulterated, whiskey-fuelled country rings true however, via a rollicking sonic presence and ramshackle charm – and they take their chances siding with musical outlaws like George Jones, Johnny Paycheck, and the Louvin Brothers over the homogenous sparkle of more chart-friendly players.

First up bringing the two-step and shimmy, is driving guitar number, ‘Laundromat’ – the protagonist asking for a woman’s hand-in-marriage amid the washing machines where he works. Here the lucky lady will even get her clothes washed for free if she chooses to take him up on his offer…‘Grizzly Bear Billboard’ meanwhile, gains a lot of impact via its schmaltzy, electric-guitar shimmer, presenting us with a wistful, sexed-up tale of a past destructive romance – as ridiculous in its forthrightness (“we were going at it like a demolition derby”) as it is in its air of regret.
Songs like ‘Reason I’m Drinking’ and ‘Bar Time’ sound lovelorn, telling tales of lonely nights drinking their paycheques at the bar and are heightened by unashamedly forlorn lyrics; ‘The only friends I have are up there on that shelf’ for example. Even so, all are delivered with a tongue-in-cheek self-awareness that can’t help but raise a smile.

Til The Daylight Comes often conjures up the well-worn tropes of heartland-Americana – yet these lazy bartenders, low-hanging lights and sweating beer bottles sit dangerously alongside pool cue clashes, cowboy cacophony and kicked-over bar stalls. Leave all notions of modern country behind and come join the Country Lips party now!

Country Lips are pleased to share the video for ‘Grizzly Bear Billboard’, taken from their forthcoming album ‘Till The Daylight Comes’  -out January 6th! The band say:

“‘Grizzly Bear Billboard’ is the kind of song that, without sadness or regret, remembers the Summer for the beauty that only comes from things that must, at some time, come to an end. In the video — filmed at the Cowlitz County Fair in southwestern Washington — director Coco Foto captures our trusty E350 touring shuttle and the genuine friendship and joy that has kept Country Lips together for the last seven years. Set among carnival rides, fun houses, midway lights, and the Thunder Mountain Pro Rodeo, we do what we do best and manage to stay out of trouble long enough to make a few lasting Summer memories.
Country Lips are:
Austin Jacobsen – bass, Trevor Pendras – electric guitar, vocals, Miles Burnett – drums, vocals, Hamilton Boyce – electric guitar, vocals, Alex Leake – acoustic guitar, vocals, Jonah Byrne – fiddle, Kenny Aramaki – keys and Gus Clark – accordion, mandolin