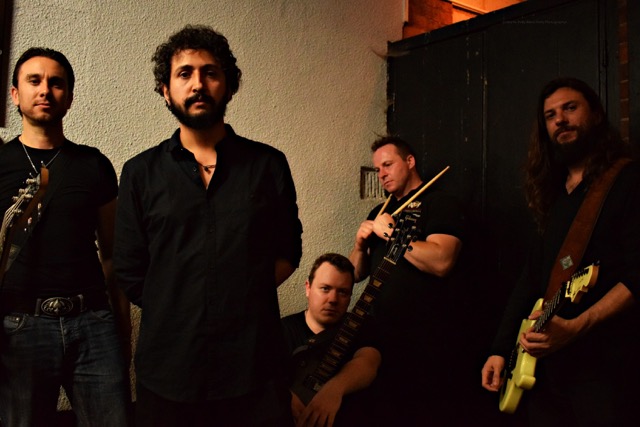 Fast rising Londoners at the ready

Chasing Ghosts formed in London in December 2014 by Lee Brueton – Born out of a passion to create dark, heavy rock music, with meaningful lyrics and catchy guitar hooks.

Their debut demo was recorded at ‘Chapel studios’ in Lincolnshire, by ‘Enter Shikari’ engineer Tim Morris. Within two months of recording the track ‘Everything Changes’ became the focus of a ‘Pluggin Baby’ campaign and was featured on over 50 radio stations in the UK, US and Canada, including ‘BBC Radio, ‘Total Rock’ and ‘Metal Nation Radio”.

After months of auditioning, they were joined by Gary Fuller on Drums, Ashley Clark on Rhythm Guitar, Maycon Milani De Matos on Lead Guitar and Nelson Cancini as Lead Vocalist.

They signed to Band Management Universal in October 2015 and spent the next few months preparing for the recording of their upcoming EP.

They started 2016 with more radio play in the Netherlands and went back into the studio to record their upcoming EP ‘Fearless’ at the renowned Lynchmob Studios in London.

Chasing Ghosts are currently recording a video to accompany their single ‘Fallen From Grace’ due to be released on Friday 2nd September on iTunes and Spotify.

Now looking to breathe life into the current rock scene, with their mature emotive, provocative and uncompromising sound, catch them on tour now in the UK.