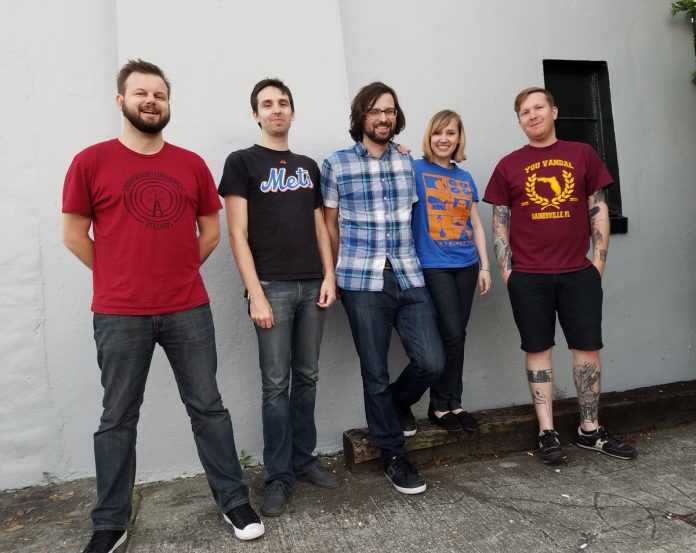 Florida punkers with a new album out

Some bands come out of the gate at full speed, dashing toward the proverbial record deal or support tour and disband just as quickly, leaving behind a few half baked songs and a dated memory. In heavy contrast, Awkward Age’s slow burn of output has solidified them as one of the Florida’s premier punk rock acts, quietly and consistently churning out material since 2010.

The roots of Awkward Age stretch back to the mid 2000’s when drummer Eric Turner and guitarist Matt Shumate were members of Tampa, FL post hardcore heroes, New Bruises. Eventually both found themselves no longer associated with the group started looking elsewhere for a creative outlet. When Shumate decided to take another stab, he reached out to Turner and singer/bassist Vic Alvarez, who had done time in the Upstate NY pop punk stalwarts The Knockdown. Soon, the newly formed Awkward Age was playing shows and recording, releasing the first demo in spring of 2011. A year later came the eponymous 7″, more touring, and a slow but steady stream of people finding the three piece.

After a handful of Fest appearances, Awkward Age went into the studio in the spring of 2014 to record their first full length, We Could Be Anywhere.The 11-track effort was recorded and mixed by Matt Ostraco at Tampa’s Epic Problem and then mastered by Bill Henderson at Azimuth Mastering. As indebted to Jimmy Eat World as it is Jawbreaker, We Could Be Anywhere is a short burst of contagious, bittersweet pop punk. Chisel Records took note, releasing the vinyl format.

By the time 2016 rolled around, life was getting in the way of forward progress for Awkward Age. Turner was about to become a father and Alvarez was set to move out to Los Angeles, 3,000 miles away from Tampa. Last shows were set up and played. Goodbyes were said. Everyone went their separate ways… for about a month until the group decided this was too much fun to give up. Friends and married couple Jeff and Katrina Snyder from Orlando, FL indie punk darlings Living Decent joined on guitar and bass, respectively.

Enter a revamped Awkward Age, newly signed to Little Rocket Records, and armed with new songs, ready to write the next chapter. Continue to burn…