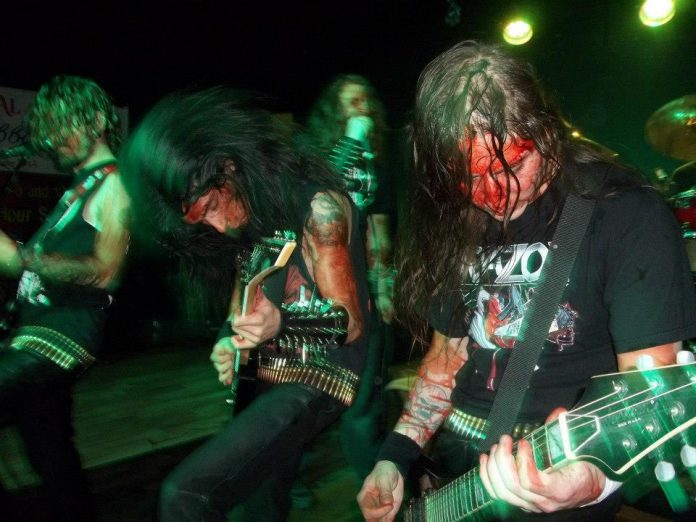 New album on the way
Avenger of Blood is an extremely aggressive thrash/death metal band, which was started in 2002 with a single vision and goal: to forge a sound in the vein of Germanic thrash and adding a modern aggressive edge to it. In August of 2003, the onslaught began when Avenger of Blood went into Trident Studios to record their 3- song “Demo 2003”. Upon its release the band not only received great reviews, but showed them also that the path they were gonna take was well in place.
Avenger of Blood moved operations from San Jose, California to Las Vegas, Nevada to better suit the band personally and professionally. The band found a strong following of fans and the onslaught continued as the band went on to play the 1st installment of Minneapolis Mayhem and various other shows proving to new fans that Avenger of Blood was a force to be reckoned with.
In March 2005, the debut album “Complete Annihilation” was released on now defunct JCM Records, and received excellent reviews worldwide. The album was recorded at Maurotone Studios in Las Vegas between the end of 2004 and into February 2005. Following the release of the album, Avenger of Blood played Northwest Deathfest 2, Minneapolis Mayhem 2, Millennium Music Conference 8, Monsters of Metal and more. Avenger of Blood continued to show fans that they were one of the best Thrash bands around.
After returning from a few shows in the Bay Area, the band went back to Minneapolis to perform at Minneapolis Mayhem 3 and Avenger of Blood went on to record two new songs for the “Speed Kills…Again” compilation CD, which was released on Heavy Artillery Records in May 2007. This recording showed progression and maturity, giving a preview of the things that were to come. Avenger of Blood was signed to Heavy Artillery Records and recorded their second full-length release at Sound Vision Production Studios, and “Death Brigade”, was released worldwide on CD and Vinyl in January 2008.
In 2008, a few line-up changes occurred when both Eric Greaney and Shawn Loureiro exited the group for various reasons. New members were brought in to finalize the new lineup. Avenger of Blood managed to get a new song written and recorded for the Relapse Records “Speed N’ Spikes 7” series Vol 5 entitled Hell Patrol.
Shortly after the release of the split 7″ with Witchaven, Avenger of Blood was put on hold because a break was definitely needed due to unreliable members and their drama as well as the band being very unhappy with the song and the direction the band was headed.
After a 3 year break, the band reformed and was able to record
“Spawn of Evil” that was released for free over the internet.
New album “On Slaying Grounds” is being released on July 15 2016 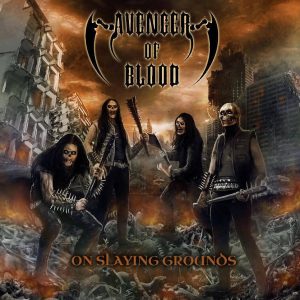 Tracklisting:
1. On Slaying Grounds
2. Warbound
3. Sealed In Blood
4. Aggressive Psychotic Behavior
5. Under The Death Cross
6. Instruments Of Chaos
7. Spawn Of Evil
8. Echoes Of Bloodshed
9. A Curse From The Grave
Radio: 4, 5, 7, 9
Web Link:
https://www.facebook.com/aobthrash/