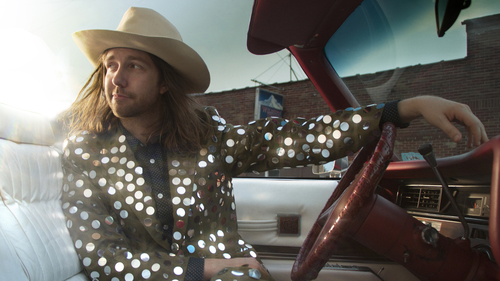 May 22, 2017
Reading time: 4 min.
Facebook
Twitter
Pinterest
WhatsApp
Linkedin
Email
Print
Telegram
Copy URL
By Andy Thorley
Having completed live dates with Lucinda Williams in the States earlier this year, Aaron Lee Tasjan heads over to the UK in September to play End of The Road festival on the back of the release of ​his new album Silver Tears (out via New West Records).
He’s also set to headline solo shows at The Islington in London on 4 September and Gulliver’s in Manchester on 5 September, before heading to Scotland to play Glasgow’s King Tuts on 7 September. Tasjan will also perform at Electric Picnic Festival in Laois, Ireland.
Like a modern day Cosmic Cowboy, Aaron Lee Tasjan creates a heady blend of country-flecked rock-n-roll, veering from acoustic blues to garage-pop psych to smooth Nashville sounds to lush Laurel Canyon fare… filled with Tasjan’s remarkable story-telling, imbued with wry wit, a sharp tongue and a lot of heart – bringing to mind the showmanship and humour of Josh Tillman (Father John Misty – whose bassist Eli Thomson produced Silver Tears), as well as Harry Nilsson and Tom Petty.

While calling East Nashville home, Tasjan recorded the entirety of ​Silver Tears in Southern California at Elliott Smith’s former studio New Monkey as well as Sonikwire Studios in Irvine, and Club Casino in Huntington Beach. “Romantically, I had the idea of Tom Petty in the studio, jamming, trying to capture different feels and see where the day was,” Tasjan reveals. “I wanted it to be live, to have that intensity that draws people in.”

Tasjan was awarded a scholarship to the esteemed Berklee College of Music but fled to Brooklyn to set out on what quickly became a wild path. Whether playing guitar in the late incarnation of glam-rock innovators the New York Dolls, the gender-bending, envelope-pushing Semi Precious Weapons, the Neil Young-signed Everest, British roots rock band Alberta Cross, Southern rock stalwarts Drivin’ N’ Cryin’ or even as frontman of the Heartbreakers-meets-Replacements rockers Madison Square Gardeners, bubbling under the surface was a songwriter using each experience as a stepping stone to inform his own unique songwriting. ​

Silver Tears follows 2015’s self­released In The Blazes which received accolades from NPR , American Songwriter and more, with Rolling Stone stating “Looking for moments of dark humor amongst the genius ­ that’s Tasjan at his core.”

No stranger to mind­expanding substances, having written most of the aptly­named In The Blazes in a cloud of marijuana smoke, Tasjan had a fit of LSD­ fuelled creativity for Silver Tears. “I decided to try this thing called microdosing where you just take little bits all day long, and stay suspended in this slightly altered state. I set up a studio in my living room to record on garageband, went with a classic tambourine/duct tape drum set…suspended a RadioShack mic from the ceiling fan. You know, the essentials. It was amazing and in a creative burst I wrote ‘Little Movies,’ ‘Ready To Die,’ ‘Dime,’ and ‘Where The Road Begins and Ends’ all that day.”

Of course not all songs on the record came to Tasjan in a chemically ­induced state and he often turns the mirror on himself, never afraid to cast himself in a negative light. “One of the reasons I’ve been able to connect with people is by being honest and saying this is a really realistic picture of who I am,” he says. “It’s not always good but it’s me.” Tasjan also points to an unlikely hero of his as someone he would like to model his career after. “I would love to be the Miley Cyrus of folk singers,” he declares. “I love the spirit of what she brings and how she uses her platform to empower people. I want to be the kind of dude where some kid who grew up in a little town in Ohio can feel, if they saw me singing or heard my album, that they could do whatever they wanted to do and transcend their surroundings.”