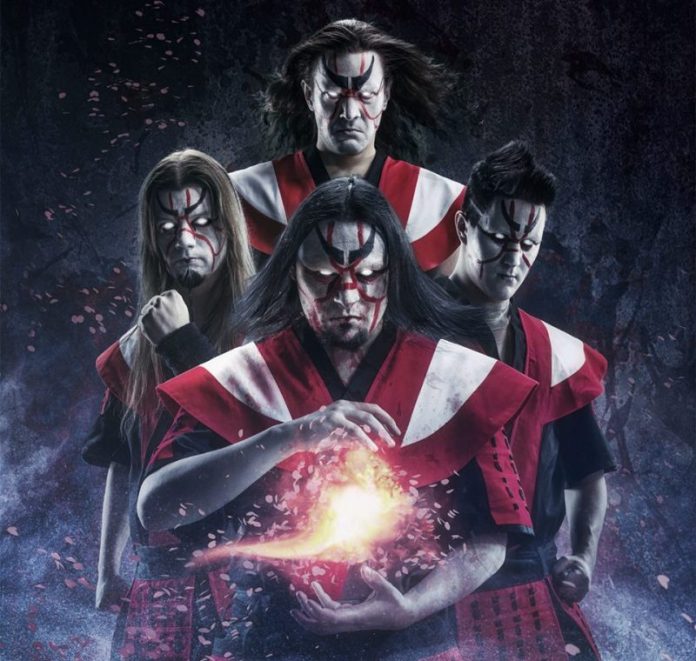 Finns who aren’t interested in the rulebook
It’s not every band whose unique style of metal can coin a new term but Finland’s Whispered aren’t interested in playing by the rules. Melding northern melodic metal, nuances from Japanese folk and even the odd idea from a videogame soundtrack and you’re somewhere on the way to Whispered’s ‘samurai metal’.
The band will once again lead the way in 2016 with the upcoming release of thei third and epic masterpiece Metsutan – Songs of the Void out on May 20th via Redhouse FMP / Inverse Records!
Formed back in 2004 by vocalist and guitarist Jouni, it was clear that from early on his love for Japan and its ancient culture would make its mark on forging the unique Whispered sound. This was cemented when he discovered that traditional Japanese instruments like shamisen, shakuhachi and koto perfectly compliment metal music.
The band’s debut album Thousand Swords, released 2010, was a loose concept album based on the legend of Musashib? Benkei, a warrior monk (s?hei).
Whetting appetites for what would follow, Shogunate Macabre was released in 2014 and was darker than its predecessor, introducing a more brutal and mature version of Whispered without forgetting the melodic and symphonic aspects. The lyrics revolved around Japanese mythology, ghosts and bushido.
Whispered has made their mark in the live circuit making notable appearance in major festivals in Finland, such as Tuska Open Air, Nummirock etc. as well as supporting the likes of Korpiklaani, Turisas, Ensiferum and even reaching as far as Japan in 2013, supporting Battle Beast and Smash Into Pieces.
Following the release of their 2016 album, the band will be playing a slot at Tampere Metal Meeting playing alongside fellow Finnish greats such as Insomnioum and Moonsorrow.
Current line-up:
Jouni Valjakka – Vocals, Guitar
Mikko Mattila – Guitar
Kai Palo – Bass
Jussi Kallava – Drums
Links :
http://www.whisperedband.com
https://www.facebook.com/whisperedband
https://www.youtube.com/user/whisperedofficial
https://www.instagram.com/whisperedofficial
https://twitter.com/whisperedmetal
https://soundcloud.com/whisperedband
Metsutan – Songs of the Void is set for release on May 20th through
Redhouse FMP / Inverse Records