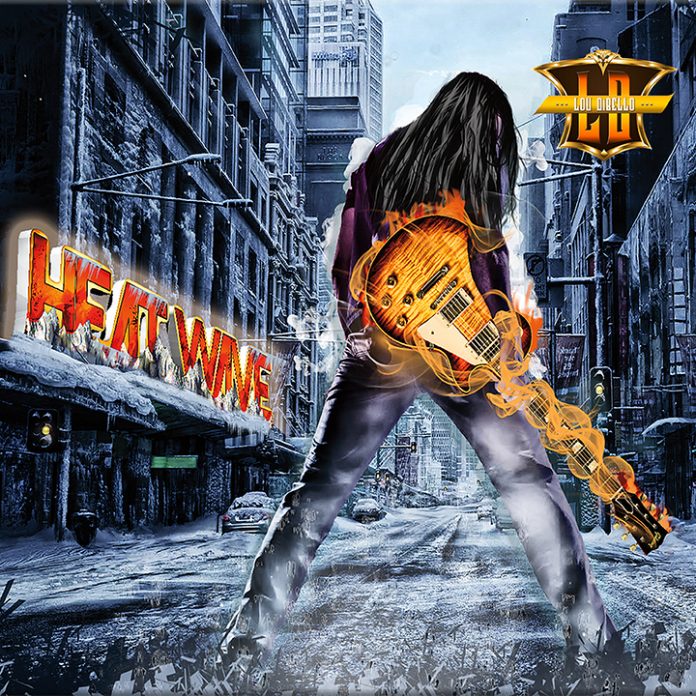 The art of six-stringer shredding has unquestionably come back to forefront in modern day hard rock and heavy metal music.

And talented guitarist Lou DiBello will soon be leaving his own mark on the genre, with the release of his album, ‘Heat Wave.’ The album features input from current or former members of Manowar (guitarist Ross “The Boss” Friedman) and Symphony X (bassist Mike Lepond), and is chockfull of headbanging rockers and six-string showcases, especially the tune “Full Throttle,” which can be sampled here:

“Heat Wave is my 4th solo release and by far my best effort to date,” explains DiBello. “The fact that I worked with such a great group of people was key, most notably singer Carsten Schulz, bassist Mike LePond, and legendary guitarist Ross ‘The Boss’ Friedman. It was a real honor to have Ross play dueling leads and harmonies with me on the epic track ‘Blood on the Cross,’ and he gave me valuable advice along the way as well. The record is a nice blend of hard rock/metal with vocals as well as instrumental tracks with a real emphasis on good songs with great guitar playing, as opposed to just great guitar playing. All out rocker ‘Let Me Hear You Scream – Rock & Roll!,’ as well as instrumental tracks ‘Full Throttle’ and my take on the Michael Schenker classic ‘Into the Arena’ are a few of the highlights.”

DiBello – who is an honors graduate from Musician’s Institute in Hollywood, California – has been a veteran of the Central Illinois music scene since the late ’80s. Additionally, he has played over 2,500 paid performances, 600 in last 5 years alone, plus countless opening slots for acts like .38 Special, Slaughter, LA Guns, Molly Hatchet, Foghat, Quiet Riot, Survivor, Black Crowes, Blue Oyster Cult, and more. As an instructor, DiBello has given over 25,000 private lessons, and started one of the first streaming guitar lesson websites.”

The guitarist also feels he has a lot to offer in the areas of instruction and collaboration with other artists, as he is a flexible player in a range of styles and enjoys playing in many different settings. Also, he is looking to place his music for licensing for TV and film.

“I love playing guitar! I am blessed to continue to pursue my passion and I am looking forward to further successes in this ongoing journey.”

To order a copy of the release please visit: http://hyperurl.co/r1i8gf