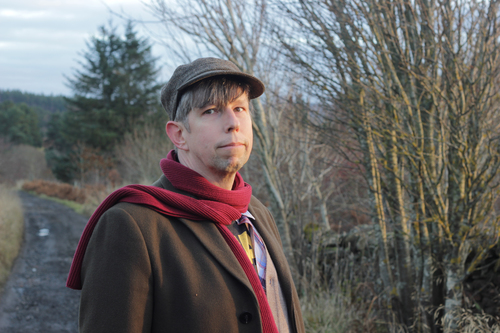 English songwriter and former Hefner frontman Darren Hayman continues his journey around the United Kingdom’s 54 Thankful Villages.
A Thankful Village is a village where every soldier returned alive from World War One. Thankful Villages Vol. 2  is due out on 26 May via Rivertones. To mark the album release, Darren will be playing an album launch show on Friday 26 May at London’s Horse Hospital, which has now sold out. We’re pleased to share the news that due to popular demand, Darren Hayman will be playing an additional date at the same venue on Thursday 25th May. Support comes in the shape of Rivertones labelmates July Skies. Caught by the River’s ever-reliable MC John Andrews will be on hand to oversee proceedings. Tickets are £12.00, and are available here. He will also be playing a series of gigs in Thankful Villages across the country over the summer.
You can familiarise yourself with Darren’s Thankful Villages project here.
The fourth village in the second volume of songs from his Thankful Villages project is Chantry, Somerset. Caught by the River shared the video for the songhere.
Darren explains in his own words:
A Thankful Village is a settlement where every soldier returned alive from World War 1. The term was coined by Arthur Mee in his ‘King’s England’ series of guides. Current data suggests there are 54 in England and Wales. In this project I intend to visit every Thankful Village and create some visual and audio artwork in situ. It is not necessarily important that the work is finished in the village but it is important that the inspiration comes directly from recording and writing within the location.
Back to solo travelling for my visit to Chantry. Ok, just one last church. It is Easter after all. Sometimes the songs are reflections of the villages. Other times the villages reflect my own troubles back at me. In Chantry I was glad to find the church open so just sat down and sung this into my iphone. I wrote the lyrics in the visitor book.
They have made an effigy of the crucified Christ from pieces of B&Q battening, and used barbed wire as his crown of thorns. In fact, I do not immediately recognise it as Christ at all. The church itself is as intricately carved and crafted as I have now come to expect Somerset churches to be.
Sometimes I look into the villages, and sometimes they stare hard back at me. Sometimes I just look hard at myself. Sometimes I could be anywhere. The journeys are long and lonely and I am prone to introspection. I am selfish; I probably let you down Chantry.
I shrank into myself.
This is a song about turning back time, but you can’t. Then you try and persuade people to make everything like before, but it’s impossible.
An ongoing and hugely ambitious folk project, Thankful Villages is only partially concerned with the war itself, moreover it is a celebration of British rural life. Darren pulls together first person interviews, folk tales and songs, field recordings and his own personal experiences to create a vast patchwork depicting community, history and legend.
Thankful Villages Volume 2 is less an album but something akin to an arcane musical radio documentary. The success of the first volume of Thankful Villageshas encouraged Hayman to go deeper into his subject. Themes of “the river” and “death” weave their way through these eighteen villages. A centuries old drowning is uncovered in “Arkholme” on bonfire night. Dennis, the river man, tells us of a tragedy on the Weir in “Cromwell”. Judy Dyble, the original singer of folk legends Fairport Convention, joins Darren in the village of “Upper Slaughter” and sings a lyric about the generations flowing like water through the village.
Darren uncovers two World War II air disasters in “Woodend” and “Wigsley”, where he records in the abandoned control tower at the airfield, the so-called cemetery of lights. Perhaps the most shocking and miraculous of tales is found in “Flixborough” where in 1974 the local plastics factory exploded killing everyone inside but nobody in the lucky village. Derek and his son tell us the story of finding each other amongst shards of glass.
However, glimpses of light shine through the darkness; a sunny day of wild swimming in “Tellisford”, a village fete with bell ringing in “East Norton” and a tale of a grateful Belgian Refugee in “Norton Le Clay”.
Thankful Villages Volume 1 garnered a great deal of media attention, with features in broadsheets including The Guardian, Financial Times, The Independent and The i Paper. Darren also appeared on The Verb with Ian Mcmillan, Loose Ends and interviewed for a feature on Radio 4’s PM programme.
Darren played special concerts around the release, doing a rendition of his Thankful Villages set with accompanying visuals and films, headlining with a full band as well as solo supporting British Sea Power. A collage of Britain’s hidden places, rich in history and community, Thankful Villages is a further chapter in Darren’s journey and a testament to his remarkable work ethic.
In 2016 Darren was awarded the title of ‘Hardest Working Artist’ at the AIM Awards for the Thankful Villages project and his prolific career.
Thankful Villages Volume 3, which will appear in 2018, has been given funding by the Arts Council.