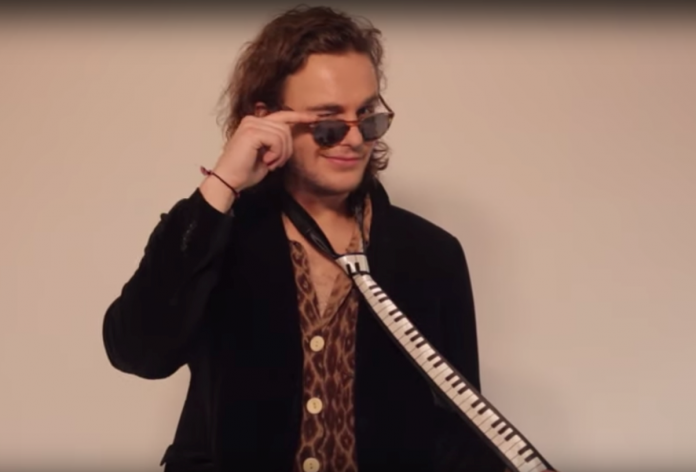 Archie Faulks has shared the video for his new single, ‘Hung Up’, following the announcement of his first headline tour this April.

The video premiered with CelebMix who said, “He has become renowned for his ability to plough a unique pop sound into his captivating song-writing and this is no different with ‘Hung Up’ – we absolutely love the track! The music video for the single mirrors the nature of the track, with its infectiously catchy and upbeat and up-tempo beat throughout, in both the track and music video. The video has a relatively chilled, relaxed nature to it, depicting ‘the making of a music video’, with Archie’s personality shining through in the video.”

The video sees Archie throwing himself into uninhibited exuberance, dancing through the buoyant melodies of the track and showing a brand new side of himself as a tongue-in-cheek pop star.

“The video for ‘Hung Up’ was a fun idea me and Frederick Wilkinson had whilst on a photoshoot: a music video about the making of a music video,” says Archie “The video cuts between me trying to be cool, and failing, dancing in an over the top style while Fred tells the stage hands to play out his vision for the video, a ludicrous combination of balloons and capes. It was a hell of a lot of fun to shoot and edit hopefully it captured the fun essence of the song; while also depicting the ‘Hung Up’ side of it with me getting more and more pissed off/diva-ish as the video continues.”

‘Hung Up’ sees Archie deliver his brightest sound yet, channelling a pop sensibility into his enthralling songwriting. The new single follows the release of his debut single ‘It Rains’ and‘Blackout’ in 2018. Both songs proved hits at radio with support coming from Radio 1 and Radio X, while they clocked up almost two million streams & counting across Apple Music & Spotify.

The songs are a taste of Archie’s forthcoming debut album which fans have been treated to a sneak preview of during his touring last year. Archie played his first shows in the US, toured Europe with Isaac Gracie and Rue Royale, and sold out his headline shows at London’s St Pancras Old Church & Servant Jazz Quarters.

He’s hitting the road again in April for his first ever headline tour and will play seven dates across the country, starting at The Jacaranda, Liverpool on April 13th, finishing at London’s Camden Assembly on April 23rd.

Archie has also been announced to play The Great Escape Festival & Live At Leeds festivals.