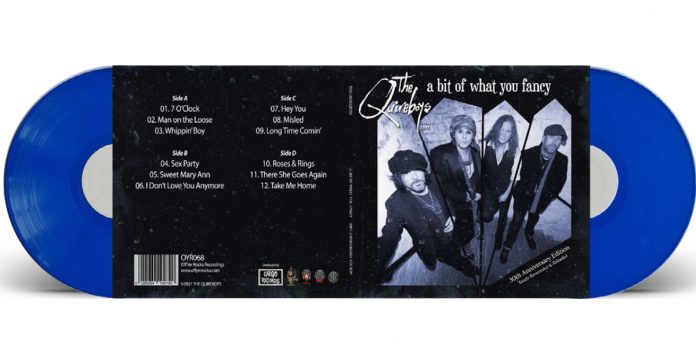 A Bit of What You Fancy 30th Anniversary Edition will be released on July 30th, 2021 as both CD and Digital Download, with a 10″ double LP, blue vinyl edition available towards the end of September 2021.

This studio re-recording of their iconic album reflects the current Gypsy Rock n Roll sound of The Quireboys, and proves to be powerful, inspirational, and full of all the quality of a modern-day recording.

“A Bit of What You Fancy” features founder member Spike on vocals alongside new recruit Guy Griffin on guitar and showcased no fewer than 5 hit singles – including “Hey You” which peaked at number five in the US Billboard Rock Chart and number fourteen in the UK Singles Chart.

Spike and Guy have been the backbone of THE quintessential British rock’n’roll band ever since – and having added now long-standing members Paul Guerin (guitar) and Keith Weir (keys) The Quireboys have honed their style into the gypsy rock ‘n’ rollers we know and love.

Their first single from this album 7 O’Clock, is available to buy and stream here and has already received over 10,000 streams!

Quireboys frontman Spike commented:
“It’s where it all began, it was an incredible album that launched our careers, but the way we sound n play now doesn’t give it the justice it needs. Henceforth, it’s been a pleasure updating it to our modern-day Gypsy Rock n Roll Sound. I’m sure everyone will enjoy this new version in all its glory!”