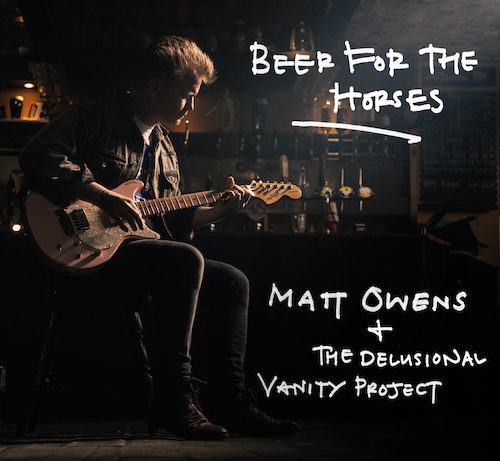 British singer-songwriter and musician Matt Owens has shared a brand new song, ‘Beer For The Horses‘, the first single from his forthcoming album of the same name, out October 21st, 2022 and available to pre-order/pre-save now.

Listen to ‘Beer For The Horses’ here.

The follow up to his celebrated 2019 solo debut Whiskey and Orchids, and 2020’s acclaimed Scorched Earth – recorded under strict Covid restrictions, meaning the majority of the parts had to be multi-tracked separately – new album Beer For The Horses finds Owens back in the live room surrounded by The Delusional Vanity Project, a seven-strong band of noteworthy musicians he’s crossed paths with throughout his twenty-year career.

Matt and the band cut the album’s ten songs live to tape at Devon’s Middle Farm Studios over the course of a weekend in January, and ‘Beer For The Horses’ is the perfect introduction to the record’s visceral, rock-tinged dynamic. Of the song, Owens said:

“This was written for a photograph. It hangs in a bar or either Kilkee or Kinsale, and I need to find out which. It’s the home guard posing in a bar and a shire horse has poked his head through the window and stolen a Guinness at the crucial moment. Got to still have fun, cos these are the times…”

Known for his work as a founder member of indie-folk band Noah and The Whale, who he toured the world with for almost ten years, Matt’s solo music has drawn attention to his own songwriting, allowing him to explore an edgier side, telling stories laced with dark humour and wit that will appeal both to fans who have followed his career to date, and those looking for something more gritty, and less polished. Never afraid to put in the time and miles, he’s also spent recent years developing his skills as a producer and co-writer – notable credits include Elles Bailey’s radio hit ‘Sunshine City’ – while appearing (both as a collaborator and support artist) with the likes of Thea Gilmore, and performing his solo music at festivals across the UK.

Beer For The Horses will be available on October 21st, 2022, with the first single and title track available to stream/download worldwide now.