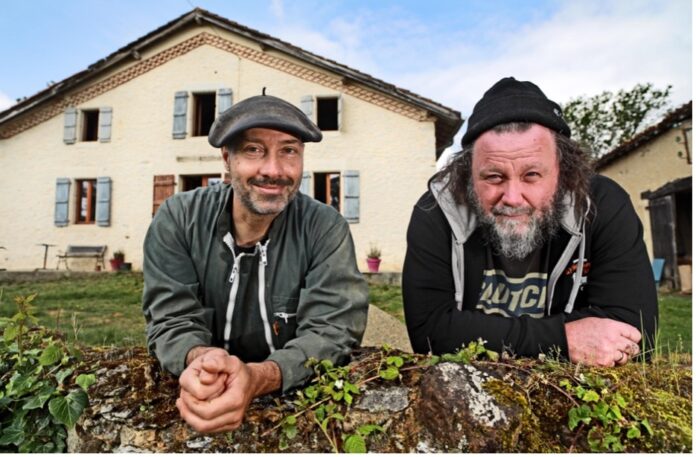 The Inspector Cluzo are excited to release their third single Running A Family Farm Is More Rock Than Playing Rock’n’Roll Music. The track is accompanied by a video, which can be watched here. In addition, the Guascon duo are thrilled to keep their reputation as one the most prolific touring bands in the world announcing a French tour in March 2023.

The band comments: “The meaning of that ironic song is in the title itself… Independant family farms – only few remaining today- are really facing many problems today: climate’s changing, which they experience more and more every season, pressure from the agro-industry who only consider them as their consumers to sell them fertilizers, seeds, etc… and a hard green-washing propaganda. They are also so few to feed lots of people who does not want to do this hard committed job.As farmers ourselves we have experienced this and as we’re also a rock band, we could confirm that all this is just true: Touring and playing in front of thousands of people is much easier than dealing with Mother Nature’s anger due to climate changing as well as with all factory farms and agro-industry pressure added to the permanent green-washing.”

The band continues: “The video is made with extracts from Yan Sourigues ‘Running a
family farm’ documentary, which will be released later this year.“


The Inspector Cluzo are also set to release brand new record Horizon on 27th January 2023, via F.thebassplayer Records. Two singles have already been released: Horizon and Swallows. Recorded in three weeks and produced by Grammy Award winner Vance Powell, Horizon is the deepest and truest album The Inspector Cluzo have written to date. Each song shares and takes inspiration from real life events and experiences.

The band has played over 1200 shows in 67 countries to date, completed sold out USA support tours with Clutch and Eels in 2019, alongside a host of festival appearances across the globe (including Lollapalooza Chile and Brazil) and a maiden US headline tour. In the summer of 2022 The Inspector Cluzo played extensively on prestigious stages across Europe, including the widely renowned Hellfest Festival, where they gathered a crowd of 50,000 fans. Now they are gearing up to hit France by storm, with more dates to be announced!

Previous article
FAITH IN SAXON
Next article
MEET IN FLAMES