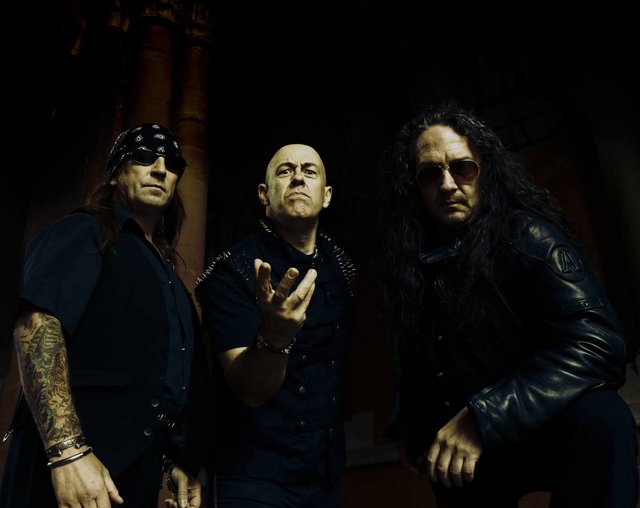 In mid-2015, former VENOM member Tony “Demolition Man” Dolan, together with original members Jeff “Mantas” Dunn and Tony “Abaddon” Bray, formed a second incarnation of Britain’s seminal black metal band. After coming together under the flag VENOM INC, history began to write itself once again. Now, after proving their lasting prowess on the road and at festivals internationally throughout the past year, the band is pleased to announce their signing with premier international heavy metal label Nuclear Blast Records. The band is scheduled to release a new album this year – more details coming soon!

Nuclear Blast A&R Manager Jaap Wagemaker states, “Nuclear Blast is very stoked to welcome Mantas, Abaddon and the Demolition Man as new members of the Nuclear Family! We grew up with the first three albums that Mantas and Abaddon recorded and made them legendary, and that led the foundations to black metal! I’ve also been a big fan of ATOMKRAFT with the Demolition Man as well! I’ve already had the pleasure of working with Mantas and Abaddon early 90’s when there was a tribute released, ‘In The Name Of Satan’, and when they did the reunion show at Dynamo Open Air! A couple of years ago I saw them perform with VENOM INC – their first ever concert at Keep It True and ever since then the band have proven to be road warriors and have played around the globe answering to the calls of their legions!

This year I received the first demos and they proved that they are still built of iron and steel and that they have returned at full force! The band is ready to write another chapter to their legendary status! It is with great pride that we welcome VENOM INC to Nuclear Blast!”

VENOM INC‘s Tony “The Demolition Man” Dolan states, “It is my greatest pleasure to announce we are now part of the superb Nuclear Blast team and roster! Nuclear Blast is a label run by people who care about their art, know what they are doing and hold their artist roster, and the fans, to the highest standard and level of respect. Their roster includes some of my biggest musical heroes. Those artists, combined with our friends on the exceptional Nuclear Blast staff, are what makes this label the very best. Top artists and a great team. I feel humbled and grateful to join their ranks. I know we will give all we have to make this partnership the very best in every way it can possibly be. For this opportunity, I thank them. ALL HAIL AVE!”

VENOM INC‘s Jeff “Mantas” Dunn adds, “It is an absolute honor and a privilege to now be part of the Nuclear Blast roster. I would like to thank all involved in this journey and our arrival at this prestigious destination. The one thing that I think that I can proudly say is that this has been realized through sheer hard work, perseverance and determination, and of course the amazing support from our lifeblood… THE FANS. I have to admit that I am overwhelmed and humbled by the faith and belief bestowed upon us by our management and now our new home, Nuclear Blast. So now, we have a new beginning with firm foundations in every respect. MAXIMUM RESPECT!”

Jon Zazula states, “Mantas and Abbadon have been friends of the Zazula family for 35 years, and it was Dolan that got us all together. We’ll see where it goes! I must say that their new album is über heavy – you’re going to love it!”

Maria Ferrero recalls, “I’m so happy to be able to work with VENOM INC! This band is so close to home and to my heart, as one of the first shows I ever saw was the VENOM show that Jon and Marsha presented as Rock N Roll Heaven Presents in 1983. I’ve always believed in whatever they did, and to have Jon and Chuck as partners and to be able to continue to do this with people like VENOM INC brings it back around full circle. We’re ready to knock this out of the park, have fun, succeed and pave the way for bands of the future.”

Chuck Billy adds, “Congratulations to VENOM INC for signing a multi-record deal with Nuclear Blast. I couldn’t be more proud to have such an iconic band added to the Breaking Bands LLC roster, as well. Wishing them the best of luck – the best is yet to come!”

VENOM INC are set to perform at several festivals in Europe throughout 2017, including stops at Hammerfest Festival, Inferno Festival, Heavy Metal Cauldron and others. The band will perform classic VENOM sets. See below for all current performance dates: