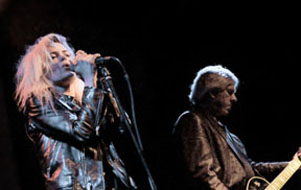 February 4, 2015
Reading time: 1 min.
Facebook
Twitter
Pinterest
WhatsApp
Linkedin
Email
Print
Telegram
Copy URL
By Andy Thorley
Wilkinson gets licked on air. Twice. The first one tonight, And we can watch online
In support of his recent critically-acclaimed solo album, Re-Licked, The Stooges’ guitarist James Williamson will be the featured musical guest on, not one, but two episodes of Last Call with Carson Daly. On Wed. Feb. 4th the Rock & Roll Hall of Famer will be joined by vocalists Jello Biafra (Dead Kennedys / Guantanamo School of Medicine) and Texas blues belter & guitarist Carolyn Wonderland. And then on Wed. Feb. 25th Alison Mosshart (The Kills / Dead Weather) & Lisa Kekaula (The Bellrays) will be joining James.
For these two late night TV perfomances Williamson & friends will be performing early Iggy Pop/ Williamson-penned Stooges’ rarities as featured on the guitarist’s Re-Licked album. Theses songs include “Head On The Curve” (with Biafra), “Open Up and Bleed” (with Wonderland), “‘Till The End Of The Night” (with Mosshart) and “I Got A Right” (with Kekaula).
In addition, both of these televised performances will also be available to view online here on the NBC website within 24 to 48 hours of each episode.
Previous article
Enigmatic French Band Emerge From Hibernation
Next article
CROW BLACK CHICKEN, Ali Clinton @Robin 2, Bilston 4/2/15