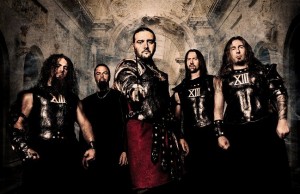 The best music-related news of 2015 was announced a week or so ago as the master’s of Ancient Roman metal Ex-Deo announced they will once again seek to conquer new terrorities by bringing forth a new album in 2017, their first since Donnie’s favourite album of 2012 “Caligvla”.

The news from the musical battlefield gets even better as it has been confirmed that symphonic maestro Clemens “Ardek” Wijers is the man to help the band create an epic “Roman Orchestral Score”.

Clemens is known for his inspiring movie scores and also his work in Dutch Black Metal kings Carach Angren. The band are thrilled with the combination of their unique and destructive death metal and the sweeping and commanding scores of Wijers, stating:

“All we can say is that the first demos that came out are mind blowing and the fit is perfect. Shivers of an old age are about to be reborn again and the XIII Legion marches forward in full force!!”

The only downside is that we have to wait a year to hear the results, but if anything is worth waiting for then this is surely it.