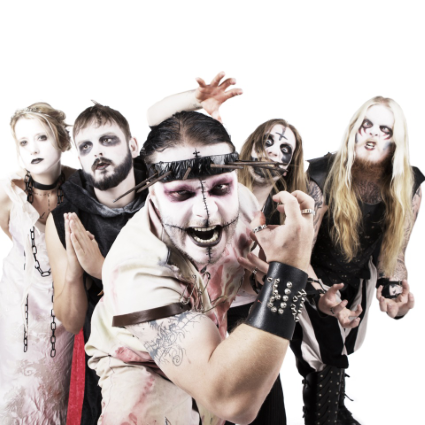 February 2, 2015
Reading time: 2 min.
Facebook
Twitter
Pinterest
WhatsApp
Linkedin
Email
Print
Telegram
Copy URL
By Andy Thorley
And they are playing Download as well. Just the standard week then…..
The air of anticipation just got a lot thicker as we’re delighted to announce that the immensely awesome new Evil Scarecrow video for Space Dementia will be getting its premiere on the Metal Hammer website at 12 noon on Wednesday 4th Feb.
http://metalhammer.teamrock.com/
Space Dementia will be airing exclusively on the Metal Hammer site for the following 24 hours so during that time this is the only place you’ll be able to see this galactically fabulous video!! It’s guaranteed to leave you shocked and stunned at its sheer awesomeness, you might be giggling a little too.
I’m also utterly delighted to say that Evil Scarecrow are now officially announced to play DOWNLOAD Festival this summer!The excitement is rising at ES HQ and plans are afoot to create an even more fabulous show than was seen last at Bloodstock last year, in the words of Dr Hell:  “We are working on a very special show for this, one that will defy the world of physics!”

Dr Hell: “The first festival I attended was Metallica at Donnington Park in 1995. Since that life altering occasion it’s been my lifelong ambition to play this hallowed ground and I finally, finally get to shout “Scream for me Donington!” We are totally stoked beyond all belief. We are working on a very special show for this, one that will defy the world of physics.”

Kraven Morrdeth: “It’s an honour to be able to play the hallowed ground of Download. So many bands I’ve grown up with have played their most iconic shows there so we have a tall order to fill, bring it on!”

Monty Blitzfist: “We have been mentally preparing for this chance in the hope it would come around, now it’s here we feel so lucky and we’re going to put something ridiculous together.”

Brother Pain: “I have been going to Download Festival for over a decade now and it’s an honour to play on the hallowed ground of Donington Park! This will be a lifelong dream realised!”

Princess Luxury: “To play Download is the one wish I have as a member of the band…..apart from world domination.”