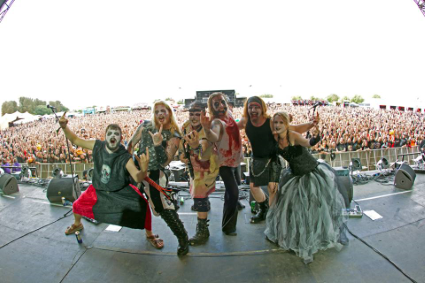 Continuing the countdown to Beardfest/Headbangers Balls, with the band that turned Derbyshire a little bit mad back in August.
Following on from their EPIC performance at Bloodstock Festival to upwards of 12,000 people at 11am, Evil Scarecrow have just released their long awaited 3rd album (the first recorded with their current line-up) ‘GALACTIC HUNT’ with the legendary producer Russ Russell (Dimmu Borgir, Napalm Death, The Wildhearts, Exploited, Evile, Sikth, Oaf etc) at the helm.
As ever the album will include influences from across the metal genre melded together with the inimitable Evil Scarecrow humour and just a smattering of some rather more imitable dance moves!

The band join up with their buddies in Lawmower Deth on December 6th to headline Beardfest – part of the Headbangers Balls charity extravaganza – at Flapper in Birmingham.

And we will be reviewing the album before that show.

Galactic Hunt was produced and mixed by Russ Russell at Parlour Studios, Kettering, UK
Mastered by Dexter Russell in the garden.
The album can be ordered from here:
http://www.amazon.co.uk/Galactic-Hunt-Evil-Scarecrow/dp/B00NFSCCZK
http://www.cdbaby.com/cd/evilscarecrow4