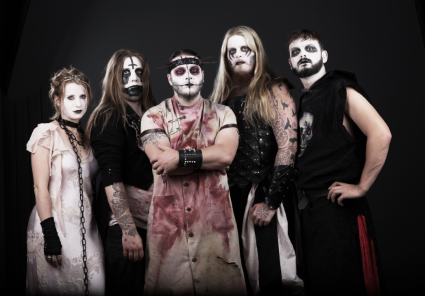 February 1, 2015
Reading time: 1 min.
Facebook
Twitter
Pinterest
WhatsApp
Linkedin
Email
Print
Telegram
Copy URL
By Andy Thorley
Evil Scarecrow have something in common with Miley’s dad…..
Evil Scarecrow’s irreverent, ingenious and always hugely entertaining live show of blistering metal & catchy anthems has been, in the main, the driving force of the band’s success, endearing them to an ever increasing and totally devoted group of fans.
If you haven’t already been privy to the crazy amounts of fun and huge crowds that they bring to their shows, check out the video footage of the insane crowd they pulled at 11am at last year’s Bloodstock Festival & you start to get an inkling of just how far they’ve come & the possibilities that lie ahead!
It’s taken a while for them to find the right company but they’ve now signed to the fabulous E.G.O Booking Agency and will be working with Jim Morewood and the rest of the team. With these bookers behind them we’re all really excited to see just how much world domination Evil Scarecrow can achieve once they start to expand their reach!
The band are thrilled:”We are absolutely delighted to be working with Jim Morewood and the team at Eccentric Gent Organisation. It’s an honour to be included on their roster alongside such a great and varied selection of bands. We are really looking forward to developing our live offering in conjunction with EGO and getting out on the road to venues that are new to us as well as some of our favourite haunts,” they tell us.