Everything Is Fine For Hawk Eyes 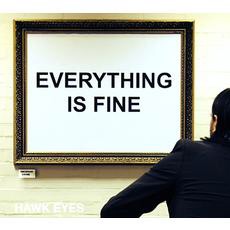 Hawk Eyes have announced the release of their new album ‘Everything Is Fine’ for February 2015. Writing for the record begun back in 2012 with spurts of creativity between tours and shows both humungous and small. Having supported the likes of System of A Down at arena shows and playing the biggest music festivals across Europe, as well as festivities such as SXSW over in the States, Hawk Eyes are poised to take over the world of heavy music. Producer Andy Hawkins took the reins throughout the recording process with additional engineering from Ryan of the band and the band’s live sound engineer Giles Stocks.

The first track to be set loose on an unsuspecting public is the rip roaring ‘Die Trying’, an exemplary slice of Hawk Eyes’ riff-fuelled brilliance which was premiered on Daniel P Carter’s BBC Radio One Rock Show recently.

Musing on the track’s conception, vocalist and guitarist Paul Astick says “I had severe writers’ block for the duration of this album – sorry Ryan, sorry Rob. To get out of a hole, I went and put myself in one and went to Spurn Point on a really bleak evening. The sea and landscape tells you how to feel. Then my imagination did the work. Not a happy song.” It’s fitting that a place such as Spurn Point, a loan sliver of land in the void of sea between Grimsby and Hull, has inspired the band’s musical thought with its scenic bleakness.

It’s been a career punctuated with critical acclaim, radio support and the hugest of shows for Hawk Eyes up to this point and ‘Everything Is Fine’ looks set to take them to an even higher level. With supporters at the likes of Kerrang!, Rock Sound, Metal Hammer and Daniel P Carter, Zane Lowe and Phil & Alice on BBC Radio1, XFM’s Ian Camfield, Team Rock Radio and Planet Rock Radio all backing the band in the past, there’ll surely be a flood of positive reactions when people get their hands on this new record. With new drummer John Mackenzie revitalizing the band and renewing their passion for being on the road (which you could argue hadn’t left them, as they seemed good when we saw them support Therapy? and Kerbdog) it’s certain that Hawk Eyes will continue to traverse the globe bringing their unique and vital brand of rock music to the masses, starting with their very own headline tour of the UK in February.

Previous article
Interview: ZP Theart (I Am I)
Next article
Two Bad Dudes As Antique Scream Plan To Self Destruct!