EVEN MORE LOST THAN BEFORE 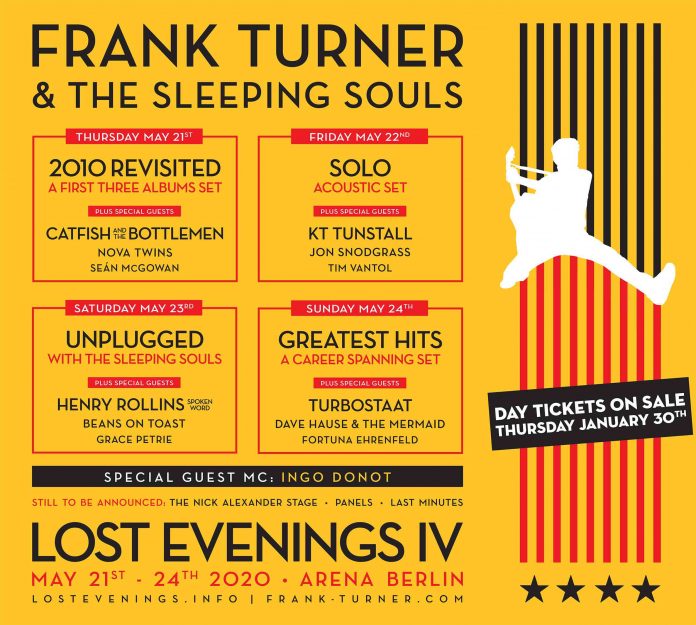 Frank Turner’s award-winning Lost Evenings Festival returns for its fourth year, coming this time to Berlin, Germany, taking over the Arena Berlin on 21st – 24th May. The 4-day festival (winner of the AIM Best Independent Festival Award in September 2017) will occupy the many rooms, bars and outside spaces available at Berlin’s Arena complex, to create a jam-packed and exciting program of events, talks and of course live music.

Following the announcement that Catfish & The Bottlemen, KT Tunstall, Henry Rollins and Turbostaat all join Frank Turner as main supports across the four nights of Lost Evenings IV; the rest of the main stage billing can now be unveiled.

Following last year’s triumphant sold out event in Boston, USA, and the two sold out events at London’s Roundhouse before that, Lost Evenings IV was originally due to take place at Berlin’s well-loved Astra venue. However, the tickets sold out so quickly and with demand so high, the festival moved to Arena Berlin increasing the size of the event considerably.

As with previous years the second stage, named as the Nick Alexander Stage (named after the merchandise manager and long-time friend of Frank’s, who was tragically killed in the Bataclan attack in 2015) will run concurrently across the weekend. And in addition to the evening performances, a selection of panels, masterclasses and workshops will also run across the 4 days, featuring leading industry insiders, musicians, experts and music professionals offering inspiration, insight and advice to audiences. The full programme of events will be announced soon.

Speaking about Lost Evenings 4, Frank says: “Lost Evenings was a vague idea, a wing and a prayer, back in 2017. To be able to sit back and take it to its third city, in the biggest space yet, with a line-up of this calibre, is a dream come true for me.”

Day tickets are available to buy from Thursday (30th January) at 3pm GMT.
Season tickets for Lost Evenings 4 are on sale now.
https://www.eventim.de/artist/frank-turner/

A full line up and programme of events, including panels and workshops will be announced soon.

The success of Lost Evenings has been built steadily over the last three years as the festival continues to cement its reputation as an event with community and camaraderie at its core. The first two years were held at London’s Roundhouse and surrounding Camden venues with last year seeing the festival make its international debut at Boston’s House Of Blues. All three years have sold out months in advance, the crowds packing out each satellite event, each stage from start to finish and of course coming together each night to share and rejoice in 4 very different performances from Frank.