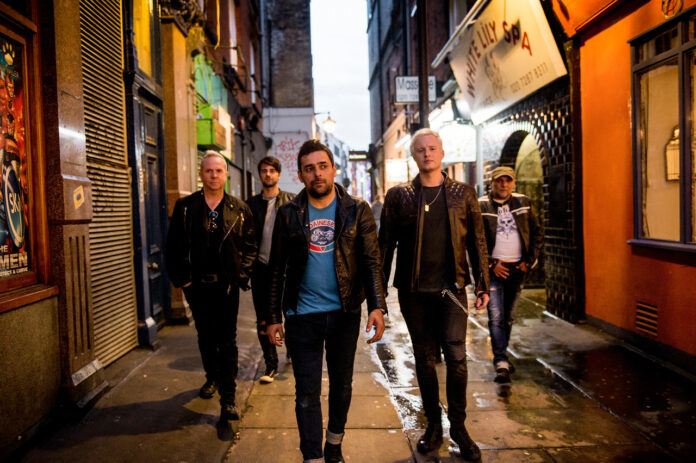 With ‘The Calton Songs’ (out 14 Oct, via Cherry Red) now just around the corner – GUN – are delighted to reveal a reinvigorated version of a firm fan favourite “Inside Out”.

The new cut arrives as the Glaswegian rockers also prepare to embark on a slew of intimate HMV in-store dates across Scotland and Winter headline shows across the UK – venue details below. STREAM ON ALL SERVICES HERE || WATCH VIDEO HERE

Released today (28 September), the “Inside Out Calton Mix” is a retooled version of a track that was one of the first songs ever written by the band. Appearing on their breakthrough 1989 debut ‘Taking On The World’, the track has since become a staple of the GUN live set and a true fan favourite. One of 5 chart singles released that year from that album, it firmly blasted the Glasgow hard rockers into the hearts of fans globally. Standing the test of time, in an early review of the upcoming album Classic Rock magazine praised the new 2022 version of “Inside Out” allowing its affirming melody to take centre-stage.

The ‘The Calton Songs‘ album will be available on Cherry Red-coloured vinyl, CD, cassette and digital, and is a full-blooded celebration of the band’s career so far with enthusiastic and brand new acoustic reinterpretations of the songs that made their name. These classics are bolstered by a new and fully electric track ‘Backstreet Brothers’, that basks in the joys of both lives and good times shared, and brings the GUN story up to date.

As Jools Gizzi says: “When the pandemic hit we realised that it was the perfect time to try and counteract the bleakness that was all around. It felt like we couldn’t write anything, or of course tour. Out of that darkness came a desire to completely rework these songs that we know the fans love, and bring a different, stripped down vibe”.

Dante Gizzi added: “It’s ironic that those feelings of negativity led to something so positive, a celebration of our career up to now”.

‘The Calton Songs‘ takes its name from the area of Glasgow where the band grew up, and where they still write their music. These new versions of great songs are cut through with un-ironic nostalgia but this is a band with an eye on the horizon for what’s to come. ‘Taking On The World‘ announced the band to a global audience in 1989, the follow up was ‘Gallus‘ which featured ‘Higher Ground’. ‘The Calton Songs’ is the latest milestone and follows-up ‘Favourite Pleasures‘ from 2017 which made the top 15, making it their biggest album in almost a quarter of a century, since ‘Swagger‘ in 1994.

With ‘The Calton Songs’ now ready, initial work on a potential new studio album started and a stretch of upcoming live dates, GUN are truly firing once more. They remain in the Top 50 modern hard rock artists in the world according to industry data specialists, Chartmetric, with top 20 albums and singles. They have toured with The Rolling Stones, Bon Jovi and Iron Maiden; this is a band with plenty to shout about.

To celebrate the release of ‘The Calton Songs’ this October’, GUN have a busy autumn of live shows ahead. Dropping-in at a number of HMV stores across Scotland for a stretch of special live & signing shows with fans (details here), the band will then embark on The Calton Songs Tour 2022, a run of fully-fledged electric shows throughout November and December that will culminate in a massive hometown party at the Barrowlands Ballroom. All confirmed UK dates are listed as follows:

From Glasgow to the world was always the mentality, and their desire to entertain remains undimmed and on ‘The Calton Songs’; these ‘Backstreet Brothers’ remain serious contenders.