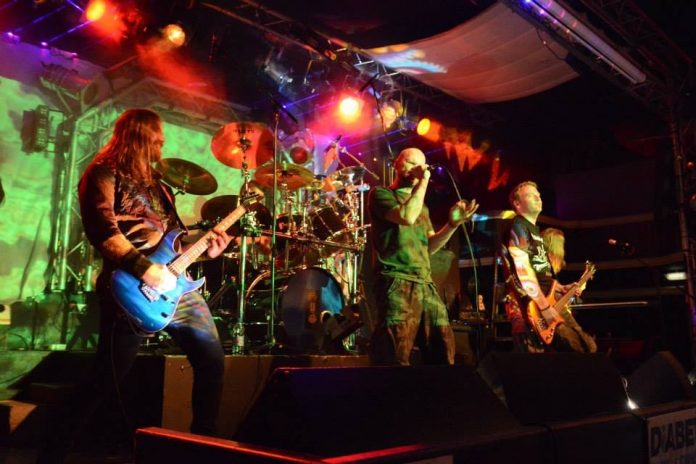 Eternal Fear, the Swedish heavy metal band who could justifiably lay claim to being the nicest men in music, have just released new album “UK DAMNATION: Live In London” via the Burning Halo label.

Recorded live in London (do you see what they did there?) on last year’s live jaunt the record shows the world just how good the band are on stage.

The album documents a moment in the bands history with the appearance at the famous Intrepid Fox venue being the first ever ETERNAL FEAR show in London.

Thankfully the evening lived up to the bands expectations with the
crowd welcoming the band with open arms, raised fists and passionate vocal support.

The album contains thirteen songs which are taken from the bands back catalogue with a strong emphasis on tracks from the “Eternal Damnation” album which the band was promoting at the time including “Army From Hell”, “World Comes Down” and “G.O.D” which have become crowd favourites especially here in the UK.

“UK DAMNATION – LIVE IN LONDON 2013” shows a band that has hugely risen in confidence following the ever increasing success of touring the UK and finding a fan base willing to greet each return. Four dates in October 2014saw the band hitting new territories as well as making a much anticipated return to the West Midlands which has become a stronghold for the band where they continue to gain an increase in fans and reputation with local media.

For those not previously familiar with Eternal Fear the band formed in their hometown of Karlskoga, Sweden in 1995 and took to honing their sound with the recording of demo tracks, performing at the local live venues before releasing their first album “Never Ending Existence” in 2002. Further albums followed with “Evil Deeds” in 2007, “Embraced in Darkness” in 2010 and in 2013 the highly acclaimed and most successful release to date came with “Eternal Damnation” which has proved popular throughout the metal world.

We have the record so expect a review next week. Also check out what we had to say about their recent appearance in Wolverhampton.