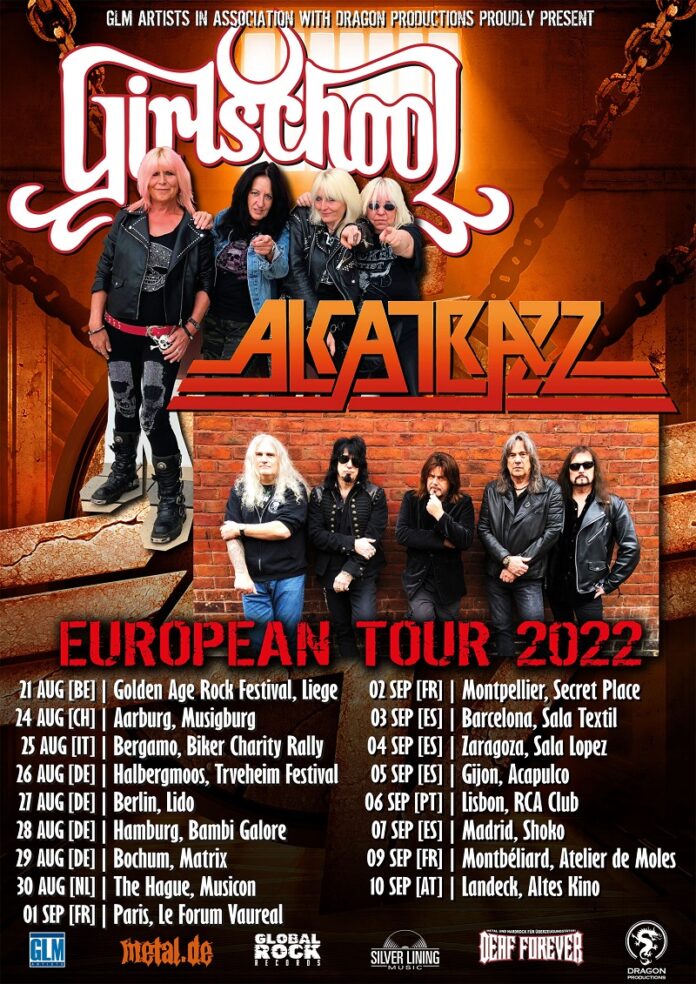 ALCATRAZZ, the mighty Los Angeles-born guitar-driven heavy metal icons, release the video for the track ‘House Of Lies‘, in anticipation for their upcoming European/UK tour dates. The track is taken from the band’s album, V, released October 15th 2021 via Silver Lining Music.

From the irresistible bluesy-chug of Stump‘s guitar to White‘s infectious vocals, ‘House Of Lies‘ is a classic slice of foot-stomping heavy metal goodness and ALCATRAZZ are taking-no-prisoners in their mission to deliver the dynamite that is V.

Founding Alcatrazz member Jimmy Waldo comments: “We are excited to present the new lineup and new music to our fans in Europe, the band are sounding better than ever and we will be performing songs from across the entire Alcatrazz catalog. As a taster check out our new video ‘House Of Lies‘ which features on the road concert footage… plus Doogie showing us around his home of Edinburgh, Scotland!”

After a successful co-headlining UK tour, Alcatrazz and Girlschool now hit Europe for yet another run together. Both bands providing an in-your-face evening of full volume Heavy Metal! Kicking off at the Golden Ages Festival in Belgium, it’s no rest for the wicked with the two bands set to bring their electrifying show to the UK in February 2023.

With neo-classical “shred lord” Joe Stump on guitar, founding members Jimmy Waldo and Gary Shea, plus the addition of Doogie White, Alcatrazz are offering a high energy metal show covering the Alcatrazz classics plus Doogie‘s own work as a member of the Michael Schenker Fest and Ritchie Blackmore‘s Rainbow. Newly joined by drummer Larry Paterson, formerly of Blaze Bayley Band, Alcatrazz are a metal supergroup in the true sense of the word.

The British rock band, Girlschool, formed in the New Wave of British Heavy Metal scene in the 1970s, frequently associated with contemporaries Motörhead, are the longest-running all-female rock band, still active after almost 40 years.  Originally formed in 1975 from a school band called Painted Lady, Girlschool enjoyed strong media exposure and commercial success in the UK in the early 1980s with their albums of “punk-tinged metal”. During their career, Girlschool travelled the world, playing at many rock and metal festivals and co-headlining with important hard rock and heavy metal bands, such as Black Sabbath, Rush and Rainbow. They maintain a worldwide following and are an inspiration for many female rock musicians. The band features original and founding members Kim McAuliffe, Denise Dufort, long-tenured members Tracey Lamb and Jackie Chambers.

V is produced by Giles Lavery and Jimmy Waldo, and mixed by Andy Haller (Elton John, Joe Cocker and System of a Down).
Watch/Listen to the full album V here