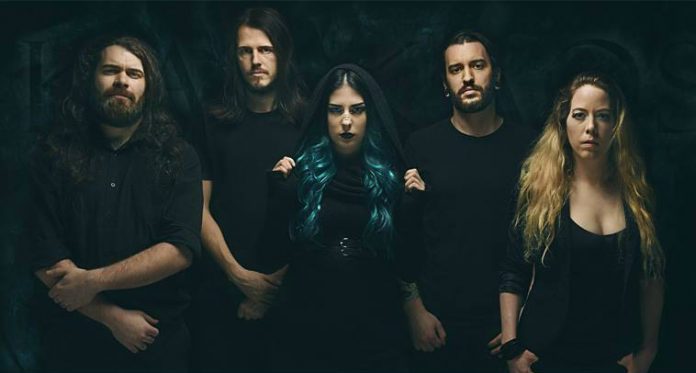 May 5, 2017
Reading time: 1 min.
Facebook
Twitter
Pinterest
WhatsApp
Linkedin
Email
Print
Telegram
Copy URL
By Andy Thorley
KARKAOS has evolved into one of the most reputable and celebrated melodic extreme metal acts hailing from Montreal, QC.
Unleashing their debut LP “Empire” in 2014 and EP “In Burning Skies” in 2011, this female-fronted band returns in 2017 with their forthcoming offering “Children of The Void”, which features new vocalist Viky Boyer, drummer Justine Ethier (Blackguard) and lead guitarist Samael Pelletier.
KARKAOS‘s first single and music video “Kolossòs” is now streaming at the following link:
Recorded, mastered and mixed with Christian Donaldson and Marc-o Frechette at The Grid (The Agonist, Cryptopsy, Neuraxis, Beyond Creation) and Silverwings Studios for keyboards (Blackguard, Ex-Deo , Distoriam), “Children of The Void” features collaborations with guest artists Lindsay Schoolcraft from Cradle of Filth and Morgan Lander from Kittie. The artwork was made by the immensely talented Marcela Bolívar while the layout was done by Fred Riverin from I Legion.
“We have been working hard for a long time to be able to give you an album that combines beautiful melodies to our own symphonic signature, groovy and brutal riffs to intensity as well as catchy choruses.” comments guitarist Vincent Harnois.KARKAOS will be hosting CD release concerts on May 26th in Montreal at Foufounes Électriques with Vehemall, No One Dead and Pronostic plus May 27th in Jonquiere, QC at Le 4 Barils.