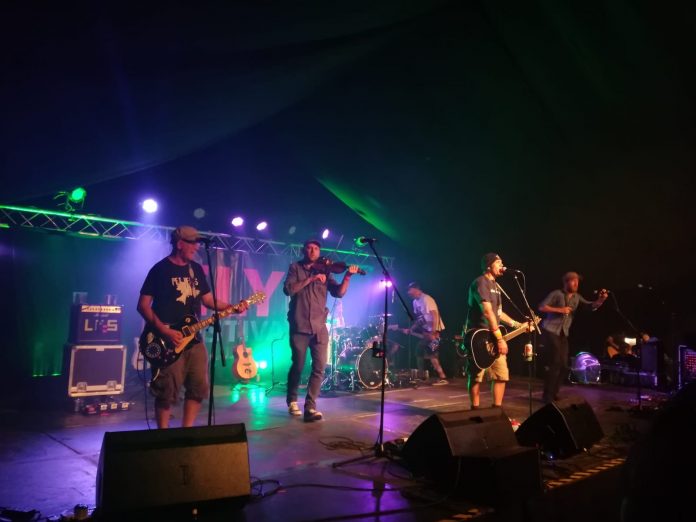 Rory McLeod finishes his set here with “No Use For A Gun” and aside from being a fine song, a vicious excoriation, actually of the gun laws around the world, it actually exemplifies everything that singer songwriting should be about but seldom is. The same could be said about the rest of his set, too. Fabulous storytelling and interesting songs too, with an interesting angle from an experienced performer who knows his craft inside out.

The same, in fairness can be said of Adrian Nation, although his songs come from a place which is more personal. He plays a new song, premiered this morning in a workshop about his experiences in Palestine, but many of the rest are from his “Anarchy And Love” album from a couple of years ago. “River In The Rain” centres around his late father and takes in three generations of his family, and one of his earlier ones, a gorgeous “The Heart Beats On” shows his class has been long in evidence.

Having reviewed Martin Harley’s music over the years, it was a pleasure to finally get to see him live. A packed tent greets him too and significantly too, this is a solo gig, meaning it’s just him and his slide guitar. This allows the skill to come through, but more than that, the power of the songs too. The bleak “Blues At My Window” (“one to get you in a party mood”, jokes The Londoner) and a new song “Brother” are both cut from the same cloth, but it’s the closing traditional blues of “Nobody’s Fault But Mine” – or more accurately something he says before playing it – that best sum Martin Harley up. “Here’s a song I just love playing”. It shows.

I’ve been to many folk gigs in my life. Until tonight, I’ve never seen one create a moshpit.

But then there aren’t many “folk” bands like Ferocious Dog.

I look over to my right in their version of “Johnny I Hardly Knew Ya” at the chaos, and you think: “this is no longer a festival, the Hell Hounds have taken over.”

And I get it. I get why. I’ve written this before, recently, but there are few bands that have affected me in the last 20 years as when I came across FD late last year, but even allowing for that the Nottinghamshire outfit do appear to be on top of their game right now.

“Cry Of The Celt”, “Gallows Justice” and Spin” are as good an opening triumvirate that anyone has, and “Black Leg Miner” is a social commentary on the bitter divisions that still exist in the wake of the Miners Strike, but it still has a celebratory air.

This is just loads of brilliant songs, brilliantly played, elements of Rancid, The Clash one minute, in the wonderful highlight “Crime And Punishment” then the next, the beautiful and poignant “The Glass”, discussion on the Irish Troubles in “Quiet Paddy”.

Underpinning all this is Dan Booth’s violin, which sounds especially rabble rousing tonight, but John Leonard is a human whirlwind, and when they play “Hell Hounds” it feels like a moment when it ceased to matter where this took place.

If that is their anthem, then why FD are special is this: as Ken Bonsall says before “Slow Motion Suicide”, “we don’t do encores….” now this is a Festival, they’re closing it, and even the artist before them took a curtain call. Not Ferocious Dog. They don’t need adulation. They need a vibe. They need their people. They’ve got all they require.

This happened to be a folk festival. It could just as easily have been a punk one, or a headline set, whatever. The result would have been the same (albeit this did, judging by the smiles on faces on stage, seem to have been a special one).

Genre lines are nonsense. There are – in honesty – only two forms of music, good and bad. As I walk out of the tent that Ferocious Dog have just turned into one of their own gigs tonight I overhear a bloke say to his mate: “they were very good, but it wasn’t folk, was it?”

Yes, pal. Yes it was. In the grand tradition of folk being the people’s sound. And you’ve just witnessed one of the finest live bands this country has got.