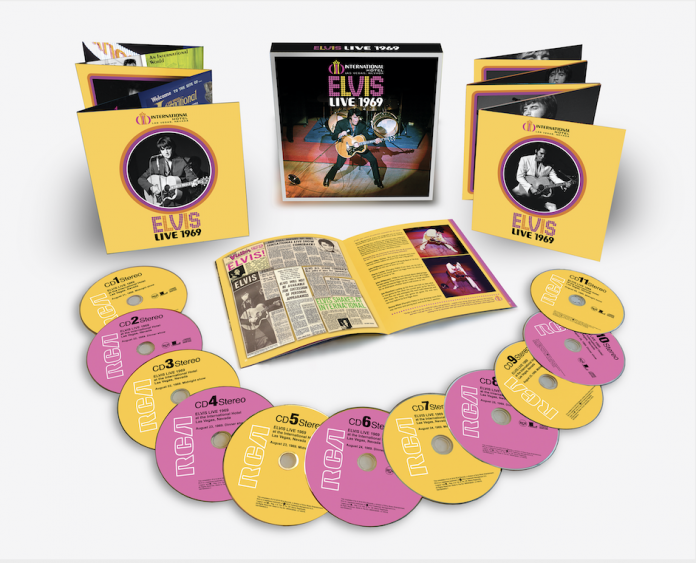 The 50thanniversary of Elvis Presley‘s transformative Las Vegas residency at the International Hotel will be commemorated this summer with ‘Live 1969’, a deluxe 11-CD box set out 9 Auguston RCA/Legacy Recordings, a division of Sony Music Entertainment. Marking his return to the stage for the first time in eight years, Elvis’ 1969 Vegas run featured 57 sold-out shows and the live debut of his signature #1 hit Suspicious Minds (the track celebrates its 50th anniversary on 26 August). The transcendent performances included The King of Rock and Roll backed by two vocal groups (The Imperials and The Sweet Inspirations), a full orchestra and a band later known as the TCB band.

‘Live 1969′ is the definitive collection of The King at the height of his power. For the first time ever, it features the release of eleven complete sets from Elvis’ August 1969 engagement at Las Vegas’ International Hotel. Of these performances, four are being released in full for the first time ever – including two Elvis shows that have remained almost completely unheard for fifty years (August 22 and 25). The package also includes a 52-page booklet with rare photos, memorabilia and an oral history by Ken Sharp curated from historic interviews with Elvis, Colonel Tom Parker, Tom Jones, Jerry Schilling, James Burton, Cissy Houston, Terry Blackwood, George Klein, Fats Domino and more.

Fans who pre-order these releases through ShopElvis.com can select from bundle packages that include an exclusive t-shirt and a replica International Hotel keychain.

Additionally, an exclusive limited-edition hot pink and yellow version of the 2-LP ‘Live at the International Hotel, Las Vegas, NV August 26, 1969’ will be available through Shop Graceland, and fans who use Shop Graceland to pre-order will also receive a collector’s item Elvis TCB keychain with purchase.

Elvis’ residency at the International Hotel followed his massively successful Comeback Special on NBC-TV in 1968, featuring Elvis for 29 nights and a total of 57 sold-out performances. The International Hotel boasted the biggest showroom in Vegas at the time, with a stage large enough for a 40-piece orchestra and capable of seating 2,000 (although 200 more were accommodated each night). The shows were considered to be a dazzling success by fans and critics alike.

In addition to ‘Live in 1969’, RCA/Legacy Recordings will release ‘American Sound 1969’ digitally on 23 August. The collection features over 90 tracks of rare and unreleased material from Elvis’ 1969 American Sound Studio sessions – which resulted in his ‘From Elvis In Memphis’ record later that year. ‘From Elvis In Memphis’ ranks among Elvis’ most universally beloved records, spawning the iconic hit In The Ghetto.

The other singles from 1969 include Don’t Cry Daddy, Suspicious Minds, and Mama Liked The Roses, each of which went on to sell over one million copies. Suspicious Mindsbecame Elvis’ 18thand final single to top the Billboard 100 – a prime example of his late career renaissance. ‘American Sound 1969’ includes alternate versions of each of these classics and more.